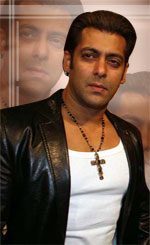 The macho man of Bollywood, Salman Khan, born on 27th December 1965 has appeared in countless movies. He made his acting debut in 1988 with Biwi Ho to Aisi where he played a supporting role. His first leading role in a Bollywood movie was in Sooraj R. Barjatya’s love story Maine Pyar Kiya in 1989. The film went on to become one of India’s highest grossing films. It also won him a Filmfare Best Male Debut Award, and a nomination for Filmfare Best Actor Award. There is no looking back for him since then. However, he has been in news of late due to all negative reasons. Ganesha examines his horoscope to know what is in store for him in 2008.

He is born in fiery Aries ascendant. The Lord of the ascendant Mars is exalted in tenth house. This combination gives him strength to fight any adverse circumstances. Mars is the planet of energy, action, and desire. Mars in Capricorn indicates that he is working toward realistic and attainable goals. Sun is in sextile aspect with Saturn in birth chart. This is very harmonious aspect, which shows that he has a certain amount of patience and enough self-discipline to slowly but surely achieve what he sets out to do. He is generally loyal and responsible person.

The Lord of fifth house of acting Sun is placed in the ninth house of luck. In addition to this, Sun is aspected by benefic Jupiter. Saturn is also powerful, situated in the eleventh house of desire fulfilment. He is currently passing through Antardasha of Mercury in Mahadasha of Saturn. Mahadasha Lord is powerful.

Venus and Mars are situated in the tenth house. Therefore, he has a passionate nature and a strong expression of his sexuality. His creative energies also are strong and he may enjoy doing some creative work and performing music or dancing. At this time transiting Jupiter is passing over the Natal Sun and is aspecting the first house of prosperity, third house as well as fifth house of acting which denotes that 2008 would be favourable for him. Fifth house being under the harmonious aspect of Jupiter, his forthcoming film may be super hit in next year.

His birth date is 27 which means the total of the number is 9 and Katrina Kaif’s number is 7. This is a good combination for both of them. Both attract each other. His date of birth total is 6 which is his destiny number. As his destiny number is sixth, he is in relevant field of Venus. Thus, he is a successful actor. Now, he is entering 42 years i.e. 4+2=6, whose Lord is Venus. Venus is the significator of love and romance in life and is placed in the tenth house of career.

This indicates that by acting or dancing he can gain public attention in the coming year and may sign more films, feels Ganesha. 2008 would be good for him at career front. He will show some improvement for his problems at professional front. Relationship with Katrina Kaif may flourish in next year 2008.

Ganesha foresees more success for him in the coming days and wishes the best for him and blesses him with all the fame and success in Bollywood!