Ganesha foresees a smooth sailing for ‘Pirates of the Caribbean: On Stranger Tides’ 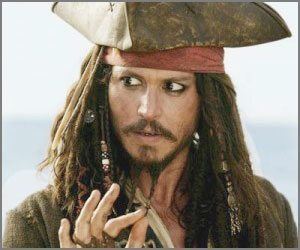 The wait is over for all those who were holding back their desire to make their vacations adventurous, as the pirates are back! And this time Captain Jack Sparrow (played by Johnny Depp) promises to take the viewers on a journey of stranger tides! The much awaited ‘Pirates of the Caribbean: On Stranger Tides’ releases this Friday, 20th May, 2011. This series of fantasy-adventure has entertained the audience since the release of its first part, The Curse of the Black Pearl in 2003. It’s sequel in 2006 was an instant hit with the audience and broke records worldwide on the day of its premiÃ¨re. On Stranger Tides is the fourth part of the series, wherein the characters of the film are searching for the fabled Fountain of Youth. And who’s giving the captain company this time? The gorgeous Penelope Cruz!
The makers of the film promise that there’s a lot to watch out for in this sequel. Will more adventures and more thrill garner more compliments for the pirates? Though the tides are strange, will they ensure a smooth sailing for the film? With the help of Vedic astrology, Ganesha finds out.

Pirates of the Caribbean 4 – On Stranger Tides
20th May, 2011
Release time chart for India’s major territory

Ganesha wishes good luck to the cast and crew of The Pirates of the Caribbean.