‘Fitoor’ likely to score a lot of points with Rich Visual and Emotional Elements! 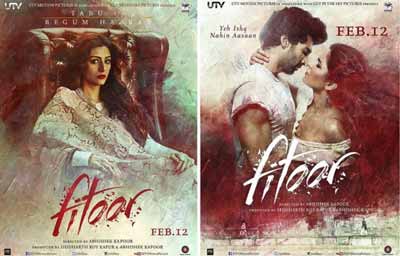 Directed by Abhishek Kapoor and produced by Sidharth Roy Kapur – ‘Fitoor’ boasts of a lot of starpower in various aspects. It is based on the Charles Dickens’ novel Great Expectations, and will be featuring Aditya Roy Kapur, Katrina Kaif and Tabu in leading roles and also has a power-packed supporting starcast. Shot in scenic locations in the beautiful Kashmir, summer-capital Srinagar, Humayun’s Tomb in Delhi, and the Film Studios in Mumbai. Some parts of the movie have also been shot in Poland. The music of the movie composed by the extraordinarily talented Amit Trivedi has already seen a good connect with the masses. Let’s find out with the help of Ganesha how this film may fare at the Box-Office…

A Normal Opening…
Ganesha feels that ‘Fitoor’ will have average opening. The planets do not indicate the movie opening to packed Houses on the first day. Due

Filmy Fortunes…
Ganesha foresees that as Saturn is placed in the 9th House of Fortune, the film’s fortunes will pick up slowly, but steadily. This movie and its performance Moreover, the length or the pace of the film may also seem to be a bit draggy in some parts.

The Performances:
erformance of the female characters in the movie will be highly appreciated. We can expect Tabu and Katrina Kaif to walk away in grace with the cake in hand, as regards the performances. Emotions, expressions and art of this film will revolve more around the performances of the female artists, feels Ganesha.

Art and Creativity – the Highlights?
When it comes to the creative elements, Fitoor is likely to score big, feels Ganesha! With the placement of the Moon in the Ascendant in the Release Time Chart, the visual appeal of this film, the production design, the background scores, the costumes, the visual appeal and the creative elements are all bound to give us a rich experience. Moreover, Moon being the Lord of the 5th House being in the Ascendant is also a big Highlight.

Intensity and Emotions – Highlights of the Film?
Ganesha feels that due to a strong influence of the Moon, this film may connect well with the audiences emotionally. It may also give us some lump-in-the-throat moments. It will also make us wonder about the power of imagination.

Business:
It will do average business abroad. The placement of the stars does not indicate the movie enjoying a dream run in the international business arena.

The Work in Real Life and the Work in Reel Life:
Charles Dickens’ novel ‘Great Expectations’ was really great but ‘Fitoor’ may not live upto that standard, feels Ganesha. Thus it may end up as a movie with class, with not much of extraordinary mass appeal.

Ganesha wishes good luck to the cast and crew of ‘FITOOR’.