Farhan will be like a blazing star in 2016 and he will shine more as an actor! 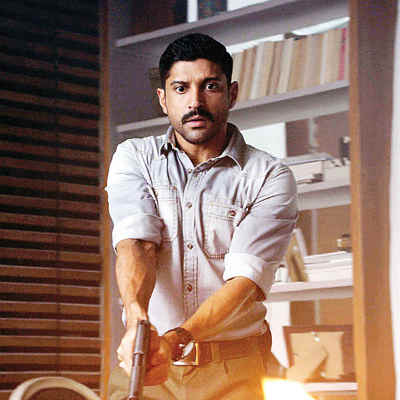 Ganesha advises Farhan to make the best use of the time till August 2016 to further consolidate his position as an actor; Singing will come back into limelight post this period!
Farhan Akhtar is considered a minehouse of talent and his famous repertoire includes acting, singing, directing, song-writing, producing, and a lot more and lets not forget, he is the co-owner of the company – Excel Entertainment Pvt. Ltd., which has produced some marvellous movies like Dil Chahta Hai, Lakshya, Luck By Chance, Karthik Calling Karthik, Don, Zindagi Na Milegi Dobara amongst many others! He is a rare talent, and true to the name of his production company, has excelled in almost everything that he has done so far! Think for a moment the intense character of Milkha Singh that he played in Bhaag Milkha Bhaag, or the free-spirited, frivolous Imraan that he played in the movie which enjoys a cult status in Indian contemporary Cinema – Zindagi Milegi Na Dobara, or the classy musician that he played in Rock On!!  Whatever be the role, whatever be the movie, this multi-talented cool Capricorn has done it all with great elan and style and still continues to do so! He will be next seen with Amitabh Bachchan in the intense thriller-drama – Wazir, and there a lot of expectations from Akhtar! He will also turn a year older a day after Wazir releases, that is on the 9th of January! Check out the exclusive predictions for the year ahead for him!
Farhan Akhtar
Date of Birth: 09th January, 1974
Time of Birth: Not Known
Place of Birth: Bombay, Maharashtra, India
SOLAR CHART

[Owing to the unavailability of credible birth-time of Farhan, the analysis and predictions have been done on the basis of the Solar Chart/ Surya Kundli with the help of his birth-date and birth-place only.]
Important Astrological Predictions :-
A Thrilling 2016!
More Action-Oriented Films in the Pipeline?
Farhan lighting up the social circles?
Brighter Chances for Farhan the Actor?
Careful with the investments...
Too much activity, lesser creative satisfaction...
With Ganesha's Grace,
Rantidev A. Upadhyay
The GaneshaSpeaks.com Team
Share