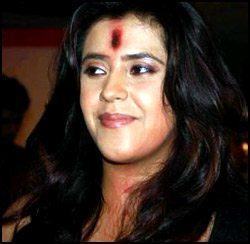 The undisputed queen of the modern version of the Indian television, Ekta Kapoor, the daughter of the yesteryears’ illustrious Bollywood actor
Jeetendra is not someone who needs much introduction. To her credit, she has made an indelible mark in the big, bad world of Indian films and television without the usual ingredients. Star-studded glamour? Minus! Classic, diva good looks? Minus! Acting in films? Minus! And, hosting, dancing, plastic surgeries, romances? All minus! And yet, fiery, spunky and brazen, Ekta has achieved what few other star-progenies of the time have.

All of 37, she is already the producer-par-excellence of the television in India, and has also had a fair share of production success at the box-office. Little did people know, when Ekta with her mother Shobha initiated her production company Balaji Telefilms in the year 1994, that this would go on to become one of the biggest production houses of the Indian TV. With the serial Hum Paanch came Ekta’s first success; she has never looked back since then. Churning mega-hits with the famous K factor, the name Balaji is still going strong. Her production house forayed into the film production in the year 2001, and year 2011’s most successful movie ?? The Dirty Picture – was theirs. Do we need to say more?

Big, red tikas on the forehead, myriad religious threads, eclectic dressing-sense and a ‘i-give-a-damn’ attitude are Ekta’s trademarks, the ones she carries with an audacious ??lan. Bold, spontaneous and unpredictable, Ekta has remained in the limelight, not only for her superior line of work and saas
bahu serials, but also for her torrid personal life. Scandals, romance and break-up stories, allegations on her temper and choices ?? the common
additives of the glamour-world have not left her alone. Fighting all with a smug smile and a sarcastic lift of an eyebrow, Ekta has borne it all, and has managed to silence and shun her critics. Ekta celebrates her birthday on 7th June. Ganesha takes that as an opportunity to see what lies ahead for
her. Read on: 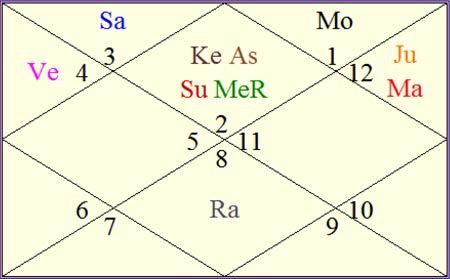 Lord Ganesha blesses Ekta and wishes her a great birthday and a lucky year ahead.