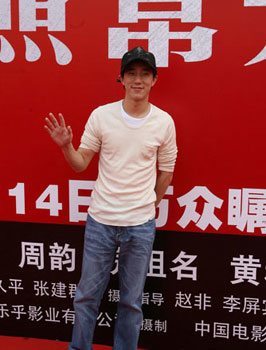 Jaycee Chan, the son of famous Kung Fu master and mega star Jackie Chan doesn’t want to follow the footsteps of his father as far as career is concerned. Instead, he was found mixing with the arty stars at the Venice Film Festival. Ganesha wants to have a look at what future has in store for this 24-year-old young Chan. For this, let us have a close look at the planetary positions in the Horoscopes of the father-son duo.

Jackie Chan :Looking at the Moon chart, Jackie has Taurus Ascendant with conjunction of Jupiter and exalted Moon. Exalted Saturn is placed in the 6th house and aspecting on Mars and debilitated Rahu in the 8th house. Sun is posited in Revati Nakshatra. Conjunction of Venus and Mercury in Navamansh chart lead him in career of acting and drama. On the other hand, due to Exalted Saturn having aspect on Natal Mars and Rahu, he was pushed in the field of Martial Arts and Kung-Fu. Strong conjunction of Jupiter and Moon made him Superstar in Hollywood as well as over the world. Jackie is under the influence of Saturn-Mercury-Rahu mahadasha. Ganesha feels that the period of this mahadasha may give better fame and prosperity as well as financial gain through branding. He can better expand his business portfolio during this Dasha period.

Jaychee Chan :
Looking at the Moon chart, he has Cancer rising Ascendant. Rahu, Ketu, Saturn, and Mars are exalted in his birth chart where Jupiter and Mars are exalted in Navamansha chart. In natal chart, Jupiter, Sun, Venus, and Mercury are conjunct in Scorpio where Venus and Mercury are combusted. Due to the strong position of Ketu, Saturn and Mars, he is also outstandingly strong in Kung-Fu and Martial Arts. But, Ganesha feels that he may have tough path in making career in films and acting. He should do better remedy for Venus and Mercury for making the going smooth in his career. However, Exalted Jupiter may give him positive energy to triumph over his efforts in this Dasha period. After 10-12-2008 planetary forces are in good favor.

May Lord Ganesha bless him with the same amount of love and fame as his dad!