Dilwale to enjoy a Mind-Blowing Opening; may become one of Bollywood’s biggest entertainers! 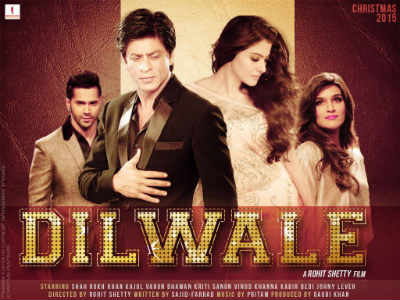 The stars predict that the scintiallating magic of SRK-Kajol will leave us enthralled; the movie will do terrific business overall!
Once again there is an SRK film round the corner and the air has already got electrified and has been filled up with a lot of buzz! There are reasons aplenty that this movie will be cherished and the bright spot which take the cake is that – it will be bringing together the sensational pair of Shah Rukh Khan and Kajol after a gap of around 5 years! Their chemistry and the classy magic that they both bring on to the screen are much anticipated. Varun Dhawan and Kriti Sanon also look adorable and sweet in the promotional posters and trailers and together the fantastic four look all set to steal our hearts! The songs – Gerua and Manma Emotion have already captured the hearts and ears of the movie lovers and it looks like Pritam – the music genius is back with a bang! Shot in various picturesque and visually delightful locations, this movie even promises to be a treat for the eyes! Many film-pundits have already started placing their bets on Dilwale to thrash all existing Bollywood records. But what do the stars indicate? Will the film enjoy an opening as wonderful as the popularity that it is already enjoying? Will it leave behind other films in the Moolah race? Come, let’s find out with Ganesha’s help…

Ganesha wishes good luck to the cast and crew of ‘DILWALE’