Dhoni Bowled over by Deepika Padukone: Ganesha’s take on this 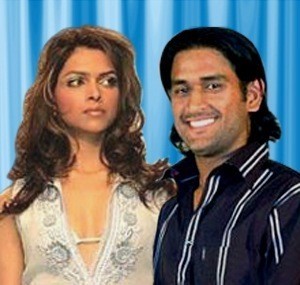 After defeating Pakistan in Twenty20, Dhoni is interested in something new and guess what? This has nothing to do with cricket. It is this gorgeous daughter of badminton champion Prakash Padukone- Deepika Padukone, who is making her debut in Farah Khan’s Om Shanti Om opposite none other than King Khan. It is to such an extent that Dhoni had even invited Depika to watch the match between India and Australia on 20th October 2007. Ganesha goes in depth of their relationship and compatibility with each other. Ganesha would like to predict something about both well-known personalities.

Indian cricket captain Mahendra Singh Dhoni was born on 7th July 1981. Looking at his Moon chart, Ganesha notes that the Lord of 5th house Saturn is situated in the 1st house. In addition, there is powerful conjunction of 5th house (house of sport and Love) Lord Saturn and 7th house (marriage) Jupiter in ascendant. This indicates success in Love as well as sports. Recently Dhoni has requested Deepika to come and watch the match. Hence she did turn up at 20-20 match at Bournbone stadium in Mumbai, with Shahrukh khan and his wife Gauri khan. Deepika was born on January 5, 1986 in Mangalore. Her Moon sign is Libra. Jupiter is debilitated in her chart. The Lord of 5th house Saturn is situated in the 2nd house. Considering this, she will have better chances of learning better skills in her profession. Venus, which is the significator of Love and romance, is combust in her chart whereas in his chart, Venus is situated in the 11th house from the Moon. Presence of Rahu is also there. In his chart, transiting Jupiter will be in square position by next year while at the same time in her chart transiting Jupiter will be passing through 3rd house where Sun, Mercury as well as Venus are situated. Considering both the planetary positions, Ganesha feels that there will be accomplishment in Love relationships. Relation would improve day by day, feels Ganesha.