Despite tough times, another award on cards for Rahman, feels Ganesha. 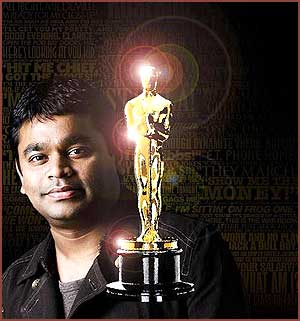 Born as A.S. Dileep Kumar to Mudaliar Tamil parents, the music maestro, the musician par excellence Allah Rakha Rahman, known popularly as A.R. Rahman, is the pride of Indian cinema. From humble beginnings as an orchestra band member at the age of 11 to being the darling of Indian film music to being a two-times Oscar (Academy Award) winner, ‘the Mozart of Madras’ surely has come a long long way. Rahman began his musical journey quite young, at the age of less than 8 years, playing keyboard and assisting his music composer dad. Life wasn’t easy once he lost his dad at a nubile age of 9, but the adversity didn’t stop him from achieving greatness.

With the release of the South Indian blockbuster Roja in the early 90s, the nation woke up to the exceptionally soulful, haunting melodies they hadn’t relished in years. A.R. Rahman had well and truly arrived! A master at employing and mixing musical instruments, both rare and usual, to create spectacularly heart warming and stimulating music, Rahman has won innumerable accolades and awards. He won his first award at the age of 20, and has never stopped since.

In his illustrious career spanning over two decades, he has worked across various Indian film industries (Bollywood, Tollywood et al) and in theatre and International cinema. Besides the two Academy Awards, two Grammy Awards, a BAFTA, a Golden Globe, 14 Filmfare Awards and 13 Filmfare South Awards, Rahman has won Padma Shri, Padma Bhushan, National Lata Mangeshkar Award and four National Film Awards among many others by the Indian government.

A music composer, singer-songwriter, record producer, musician, multi-instrumentalist and a marvellous human being, A.R. Rahman has sold over 350 million records worldwide of his film scores and soundtracks, and is still going strong. Many of his songs, including Dil se, Chaiya Chaiya, Vande Matram, Rang De Basanti, Ye Jo Des hai, Jai Ho have acquired cult status. His music and lyrics have a unique quality that manages to strike a chord with music lovers of all ages and genres. And, that is not all! Professional and personal success have not led Rahman astray, and he hasn’t forgotten his roots. He is involved in a plenty of social and charity work. In his own state-of-the-art studios, Panchathan Record Inn and AM Studios, he has made provisions for teaching music. In 2008, Rahman opened KM Music Conservatory partnered with Audio Media Education facility to tutor and train aspiring musicians in
vocals, instruments, music technology and sound design.

A marvellous human being, a philanthropist and a music Guru in the truest sense of the word, A.R Rahman turns 46 in January 2012. What lies ahead for this luminary in the coming year on both professional and personal front? Ganesha reads into his future with the help of Vedic Astrology. 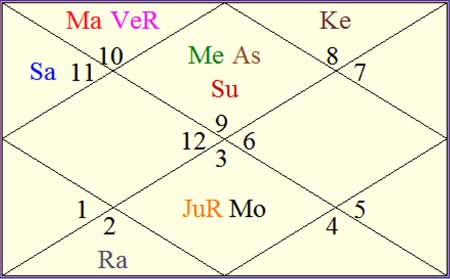 Ganesha foresees, with the help of Vedic astrology, that Rahman may have to deal with health issues this year, but it will not affect his output, and he may even go on to make an addition to his already over-flowing trophy cabinet. May Lord Ganesha bless A. R. Rahman with great success during the year
ahead.