Despite a strong star cast, ‘Teen Thay Bhai’ may not impress the audience, predicts Ganesha

The plot of the film is typical and so are the situations. But what makes the film atypical is its star cast. With great theatre personalities like Om Puri, Shreyas Talpade, and Deepak Dobriyal playing pivotal roles in the film, there is definitely something to look forward to.

These distinguished stage actors, with their remarkable performances, have left the audience in awe, not once or twice but on several occasions. Director Mrighdeep Singh Lamba and producer Rakeysh Omprakash Mehra wish to create the same magic on the silver screen with Teen Thay Bhai, a
comedy flick. The film revolves around three brothers, who cannot see eye to eye. Down on luck and out of money, all three are living in misery. But
one day, on the funeral of their grandfather, they bump into each other, and this makes the situation even worse, as they have nothing left to express except hatred for each other. Then there is a ‘kahani mein twist’. The film slowly unravels the mystery of grandfather’s will and a clause therein, which may either make their life or break it. The film also stars Yograj Singh (Yuvraj Singh’s father) and Ragini Khanna, the bubbly TV actress, who is also Govinda’s niece.

Teen Thay Bhai is slated for release on 15th April, 2011. Will the film appeal to the masses? Ganesha finds out with the help of Vedic astrology. 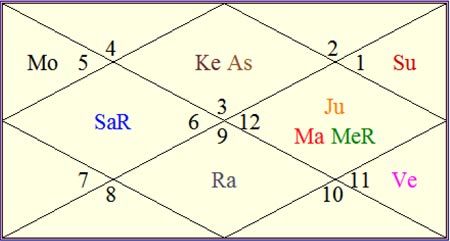 Ganesha wishes good luck to the cast and crew of ‘Teen Thay Bhai’.