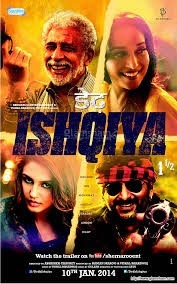 The makers of Ishqiya (2010) are back with its sequel – Desh Ishqiya, starring powerhouse performers – Naseeruddin Shah, Arshad Warsi, Madhuri Dixit and Huma Qureshi. The fresh pairing of Naseeruddin Shah-Madhuri Dixit and Arshad Warsi-Huma Qureshi has surely generated curiosity among film enthusiasts. The songs are penned by ace lyricist Gulzar and composed by none other than Vishal Bhardwaj himself. If the television promotions are anything to go by, the film promises to be an interesting mix of drama, action, suspense and thrill. And there is also one striking factor working for this directorial venture by Abhishek Chaubey- this is going to be Madhuri Dixit’s first release after she shifted her base to India in 2011. Needless to say, her fans must be waiting with bated breath to see the dhak-dhak-girl scorch the silver screen once again.

The previous installment of this film, Ishqiya, was critically acclaimed and had received good response from the audiences, but the box-office collection was not at all extraordinary. Will it be the same scenario for Dedh Ishqiya as well? Ganesha analyses the release time chart of the film to predict its fate at the box office.