After the spectacular success of Dabangg, a worldwide blockbuster starring Salman Khan and Sonakshi Sinha, Arbaz Khan and team is back with its sequel, Dabangg 2. However, this time around, the captain of the ship is first-time director, Arbaz Khan, and not Abhinav Singh Kashyap, who had directed Dabangg. While many are sceptical about Arbaz Khan’s potential as a director, some believe that it is a sure shot hit regardless of who has directed it, given it stars original heartthrob of modern Hindi cinema, Salman Khan. Besides, it releases just around the holiday season, which may go well in its favour.

This much-awaited film has already made the media abuzz with its foot-tapping music and action-packed teasers. But, will Dabangg 2 match up to the high expectations? Will it become one of the biggest hits of 2012? Ganesha analyses the release date chart of this film and finds out what’s in store for Dabangg 2. 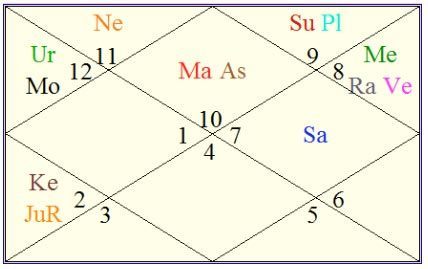 However, they will not affect the business of Dabangg 2.

Good luck! May Lord Ganesha bless the cast and the crew of ‘Dabangg 2’.