Will Boss live up to the hype? 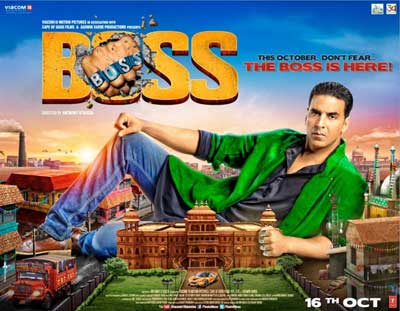 The year 2013 has till now brought fixed fortunes for Akshay Kumar. Akshay made a wonderful start in 2013 by delivering a hit in the form of Special 26, but then followed it up with a lackluster Once Upon Ay Time In Mumbai Dobaara! Akshay’s last offering for 2013 is Boss, slated for an Eid release on 16th October 2013. Boss is an action comedy masala entertainer, with Akshay Kumar, Mithun Chakraborty, Shiv Pandit, Aditi Rao Hydari and Ronit Roy in lead roles. Boss is a remake of the Malayalam movie Pokkiri Raja and Akshay plays the role of a kind hearted Haryanvi gangster known as Boss. The promos of the movie have generated tremendous response till now and the movie has already entered the Guinness Book of World Records for the largest poster measuring 58.87 meters by 54.94 meters, that was unveiled in London.

Can Boss convert all the hype surrounding it into packed movie houses? Will Akshay end the year 2013 on a high note? Ganesha analyses the release time chart of Boss and finds out whether success is on the cards for it.