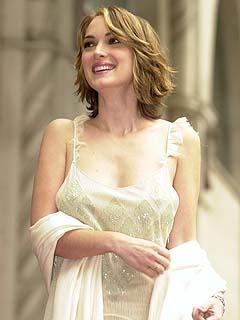 Winona Ryder was born October 29, 1971. She is a two-time Academy Award-nominated and Golden Globe-winning American actress. Later than making various appearances in film and television, Ryder received her breakthrough role in the cult classic black comedy, Heathers (1989) alongside Christian Slater. Her following performances in films such as Edward Scissorhands (1990), Mermaids (1990), Bram Stoker’s Dracula (1992), Little Women (1994), The Age of Innocence (1994), and Girl, Interrupted (1999), have won her critical acclaim and some film awards. In 2000, Ryder received her Star on the Walk of Fame in Hollywood, California.

Winona Ryder has Sagittarius Ascendant with Mula Nakshatara. Rahu is posited in second house whereas Moon is in conjunction with Mars. Saturn from sixth house is aspecting Jupiter which is posited in twelfth house. Venus is in conjunction with Mercury and Sun. Winona is under the influence of Saturn-Saturn-Rahu Mahadasha till March 2008. Ganesha feels that this period may have betterment as far as money matters and financial affairs are concerned. She can increase new sources of monetary inflow. But, she should be more cautious during September and October 2008 due to Rahu transit. Mars shall provide her better appreciation and acknowledgement from public and society. Currently, Saturn and Ketu are transiting through her 9th house. Saturn, being a lord of her 2nd house, shall provide her achievement and she may gain distinction and become a known authority within her chosen field of endeavor. She shall have more traveling- related to both religion and business during this period. She might get some solution for her problems at professional front. There shall be more financial gain in the later half of 2008. Happiness in the family is foreseen. Investments will give her good returns. Her presence of mind and confidence will play a vital role in finishing work.

Ganesha advises her to avoid unwanted arguments as well as quick decision. She should get healing of white color for betterment in next year. Some kind of meditation will be more beneficial for progress in her career.

Ganesha wishes her all the best for her career and future growth.