Bhoothnath Returns, the soon-to-be-released sequel of the 2008 much-loved children’s film Bhoothnath. Amitabh Bachachan starrer Bhoothnath caught the eye of many with its simple, entertaining narrative and excellent comic timing. Naturally, the sequel too has garnered many expectations, especially as it releases with the veteran superstar Bachchan yet again in the lead role – the male protagonist, crusading for the universal good even as a ghost. Will the film hit the bull’s eye? How strong are the stars supporting the film Bhoothnath Returns? Ganesha takes a look at the film’s release time chart to find – 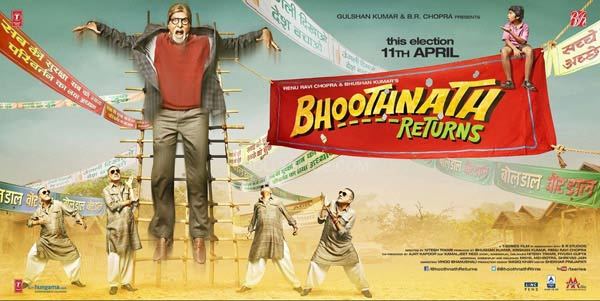 Astrological observations
Ganesha observes that Bhoothnath is returning with a Taurus Ascendant and Venus in the 10th House of Karma, closely conjunct to Neptune. The Moon is in Magha constellation that is ruled by Ketu, and Ketu is in the film’s Kundli’s 12th House. Saturn and Rahu are placed in the 6th House. Additionally, both Mars and Saturn are retrograde.

In film’s release time chart, Jupiter and Mercury are in exchange. This exchange is between the 2nd House of finances and the 11th House of gains.

Astrological predictions
Keeping in view the Astrological indications, Ganesha feels that Bhoothnath Returns will open with better than average occupancy across India.
Though, in film’s release time chart, the House of finance and the House of gains are strong, its opening does not look set to be very great.

On the other hand, film’s first weekend’s business too looks set to be good to Ganesha, at least better than the opening business.

Film’s performance will be appreciated, and its direction would also be good. Venus’ powerful position in the 10th House and its connection with Neptune indicates that some parts of the trick photography in the film will amaze the audiences.

In short, Ganesha feels that Bhoothnath Returns is going to do better than average business at the box office – and the first weekend’s business will be quite good.