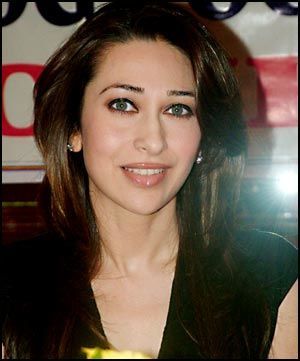 Her intention of making a mark as an actress was clear, when, despite a strong opposition from the paternal side of her family, she debuted in a Hindi films as the female lead at the tender age of sixteen. The family in question was Indian film industry's legendary Kapoor family, and the lady to break a long-held family tradition was the blue-eyed, fair-skinned Karisma (then Karishma) Kapoor. Born to Raj Kapoor's elder son, actor Randhir Kapoor and yesteryears' gorgeous leading lady, Babita, Karisma is the fourth generation of the revered and established filmy clan. What's worth admiring is that Karisma, despite such a huge filmy background, chose to start off modestly with a modest-budget, no-frills Prem Qaidi.

The journey thereon has been an eclectic one for Karisma. It's undeniable that she did manage to bring in a freshness to the then-stagnating Hindi actresses' slot. Yet, given her raw appeal and 'different' (albeit pretty) look and acting, she did have her fair share of critics. Once she paired up with Govinda and David Dhawan to make hits like Raja Babu, Coolie No. 1 and the likes, she didn't look back. However, blame it on the films she chose to be in or the general trend of the film industry that Lolo, as Karisma is fondly called, did get typecast as a glamour doll. And then, in 1996, she did Raja Hindustani opposite Aamir Khan. The movie took the box-office by storm. With it, she proved that acting indeed ran in her blood! The film also won her her first Filmfare award for the Best Actress. This success streak continued for her with films like Dil Toh Pagal Hai, which won her the National Award for Best Supporting Actress, Biwi No. 1, Haseena Maan Jayegi, and Hum Saath Saath Hai. Her portrayal of a distressed sister in Fiza, and of a a glamorous girl who falls for a crown prince that changes the course of life forever, won her a pat on the back from everyone!

One to largely remain tight-lipped about her personal life, even after a very public engagement and consequent break-up with the Bachchan scion Abhishek Bachchan, Karisma got married to Delhi-based businessman and her childhood friend Sanjay Kapur in the year 2003. The grand wedding made national headlines, and the couple now has two cherubic children, girl Samaira and baby boy Kiaan. However, their marital life has often been in the news for all the wrong reasons, and they have been said to heading divorce/ separation.

Resplendent and stylish, Karisma turns 38 on 25th June. She has been contemplating a comeback for quite a while now, and also recently appeared in the movie Dangerous Ishq. Ganesha, with the help of Vedic astrology, reads her Surya Kundali and makes some interesting observations about her life and future. Read on. 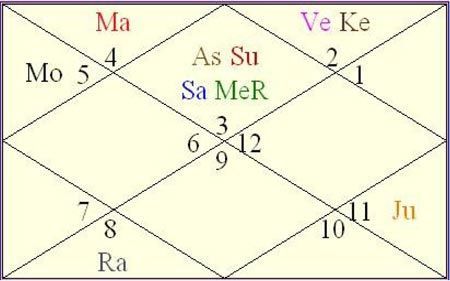 In conclusion, it can be surmised that the year ahead is good only post December 2012 for Karisma's film career, while turbulence may be expected at personal front.

Lord Ganesha bless Karisma Kapoor with a happy and successful life and career ahead.