Bajirao Mastani may go on to become one of the grandest visual treats in recent times! 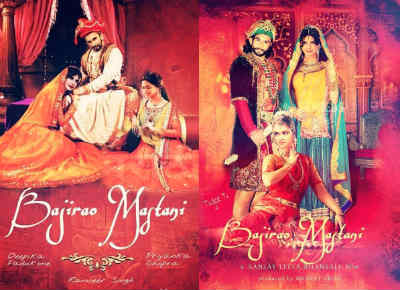 Watch out for the following: Ranveer’s intensity, Deepika’s Expressions and Priyanka’s Depth and the element of grandeur will be the film’s USP!
Bajirao Mastani is one of the most awaited films, not just of the year, but of this decade! Yes, decade, because Sanjay Leela Bhansali – the man at the helm of affairs of this film had conceptualised the idea of this film even before he began his work on the film – Khamoshi: The Musical! Salman Khan, Kareena Kapoor, Katrina Kaif, Ajay Devgn, Hansika Motwani were some of the top actors, whom till some years back Bhansali had in mind for the casting of this movie. But, like always, even in this case, destiny has had its way and now Ranveer Singh, Deepika Padukone and Priyanka Chopra will be seen fulfilling the dream of the man who believes in grand representation of emotions, sublime visual grandeur, lavish locations and set designs – Bhansali! This movie is inspired by the life story of Peshwa Bajirao – the royal warrior of the maratha empire and his two wives – Kashibai (Priyanka) and Mastani (Deepika). Releasing on 18th December, this movie shall witness a war-style clash at the Box-Office with Dilwale. Let’s find out what Ganesha foresees for the film and what effect the film and its success will have on the lead actors….

Venus and Art – Get ready for Visual Treats!

What impact will the movie have on the Lead Actors? Ranveer Singh:

Ganesha wishes good luck to the cast and crew of ‘Bajirao Mastani’!