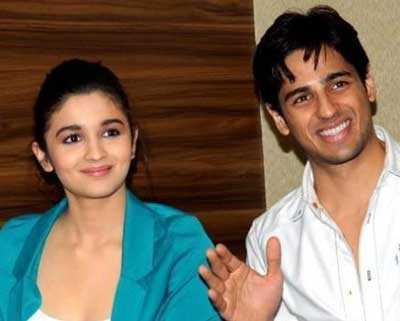 The alleged romantic relationship between the Bollywood young heart-throbs Sidharth Malhotra and Alia Bhatt has recently become the talk of the town. In spite of appearing together several times, the alleged love birds have remained in a denial mode. When Sidharth turned 29, early this year, the young couple were rumoured to have enjoyed some romantic moments in Goa, along with their B-town pals. The charming duo also attended Ranbir Kapoor’s Christmas Party together, and were also spotted at an airport, exiting the humdrum for a quiet New Year’s Eve. In fact, very recently the pictures of this Student of the Year pair, sporting matching shades, celebrating Holi together were splashed across websites and publications. The good looking Ek Villain actor Sidharth calls her first co-star a close friend, about whom he is protective, while the pretty Highway actress refuses to let anyone allow a window to her personal life – even as the loving audiences and Bollywood buzzers continue their speculations.

The gorgeous lady in question celebrates her birthday soon – on 15th March – and, around this happy occasion, we take an opportunity to look at her and her ‘close friend’s’ Horoscopes to say if the stars say ‘yes’ to their possible match? Read on…

Ganesha observes the Solar Horoscopes of both Alia Bhatt and Sidharth Malhotra to check their starry compatibility.

Is it a match?

Summarily, Ganesha feels that if the hot B-town newbies Alia Bhatt and Sidharth Malhotra tend to be ‘more than just good friends’, they are likely to face challenges, as their relationship progresses.

Ganesha also reads from their Solar Charts that the two will have to give more time to each other in order to understand each other’s emotional needs, and only after this, they only should take a decision with regard to their relationship’s future. The current stage of this relationship is premature, from astrological perspective too – so if the couple happens to take any firm decision in this regard – the prediction may require review in the future. Nonetheless, it would be better for both of them to go slow and proceed ahead with caution, sums Ganesha.