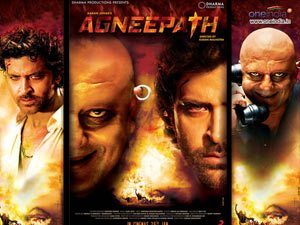 Today, when Bollywood is unabashedly and candidly looking at its own past for inspirations and motivation, remakes of successful Bollyood oldies are a norm. Amidst such a scenario, it was but natural that Karan Johar, the film-maker par excellence, chose to recreate his late father Yash Johar’s masterpiece Agneepath. The movie, when originally released in the year 1990, had failed to woo the audiences to the theatres. However, it acquired a cult status in the years that followed.

In the many years when he ruled the cine-screens across India, the original superstar of Bollywood, Amitabh Bachchan played myriad roles with innumerable shades, all, but few, essayed to perfection. And, the fact that the man himself calls his role in the critically acclaimed Agneepath as one of his ‘best and most challenging’ says it all.

In the latest version of this highly talked about classic (that releases with the same name), the iconic character Vijay Deenanath Chauhan is being essayed by Hrithik Roshan. Whether Hrithik Roshan manages to match (or even exceed) up to Amitabh’s towering performance in the original is yet to be seen. With movies like Lakshya, Krrish, and Guzaarish to his credit, Hrithik seems to fit the bill.

No wonder, the audiences have pinned their hopes on him and the movie.

Another famous role in the original played by Danny Denzongpa, the menacing, grotesque Kancha Cheena, is being enacted by Sanjay Dutt in the remake. With this role, Sanjay Dutt is expected to redefine the role f a villain in Bollywood cinema. The sizzling Priyanka Chopra features as the leading lady in the movie. And, as has now become almost the norm in modern cinema, an item number too has been added in the remake for good measure, Chikni Chameli enacted by Katrina Kaif.

Will the remake live up to the original Agneepath? Will Hrithik adeptly handle the mammoth task of enchanting the audiences with his performance and dialogue delivery? Ganesha finds out with the help of Vedic astrology.

Ganesha wishes all the luck to the cast and crew of Agneepath.