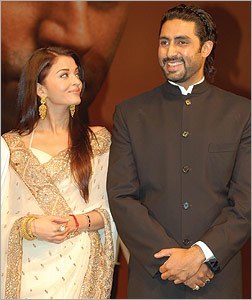 He may be the bluff-master, who beguiled everyone with his charisma but couldn’t escape from the captivating green-gray eyed Miss world, whose marveling beauty places everyone in amazement. Yes, we are talking about bollywood star Abhishek Bachchan and the cynosure of his eyes Aishwarya Rai-Bachchan internationally renowned Indian actress.

The Guru of Bollywood, with his ‘Dhai Akshar Prem Ke’ captured the heart of ‘Jodha’ of Indian Cinema and they got enveloped in nuptial bonds on the auspicious day of April 20, 2007.

We wish a Very Happy Anniversary to the lovely, made for each other, couple.

A wedding anniversary is the celebration of love, trust, partnership, tolerance and tenacity. So on this pious occasion, Ganesha wants to shower his blessings on them, presenting a prediction of their future marital bliss.

Aish Abhi’s year ahead
Ganesha observes that benefic planet Jupiter will be passing over Natal Mercury and Venus in Abhishek’s chart and for Aish it will be passing over her Natal Moon, Rahu and Venus in the 4th house. Jupiter will be aspecting Aishwarya’s fifth house Lord Saturn till December 09, 2008. This indicates that there will be a strong desire for the parenthood in this year however they may face delay and difficulties in conception because Aish has debilitated Jupiter in the fifth house and fifth house Lord Saturn is retrograde and placed with a strong malefic planet Ketu. Interesting point to note here is, Saturn the fifth house of progeny’s Lord is placed in Aish’s Karma Bhuvan with Ketu so Ganesha feels that after marriage Aish’s career may take a negative turn or she may remain passive for quite sometime. Abhishek and Aish may travel to distant places for work and pleasure in this year. They will be generating good money during the current year due to Jupiter’s transit over Venus. Rahu’s transit through Capricorn from the month of May 2008 is unfavourable for Aishwarya because she has Jupiter in Capricorn, hence Ganesha advises her to beware of controversies.

Abhishek may have increased concern for his father Amitabh Bachchan as Rahu will be transiting over his Natal Sun. Aish’s sense of freedom is going to get boosted in this year and she will have to control this, as she is wife of Bachchan family now, else she may have conflicts or differences within the family. She is born with Moon in Sagittarius so moreover she is a ‘freedom lover’ and her Sun Sign indicates that she is quite strong-headed. These traits need to be kept under check in this year. Abhi on the other hand is quite intelligent and cool-headed person but he cannot take much emotional stress. In short, the couple will have to take advantage of favourable planetary transits but will have to beware of differences. As far as money and career are concerned, both are likely to remain luckier than before.

Ganesha wishes good luck and Happy Marriage anniversary to Abhishek and Aishwarya. We hope that may the couple cherish the memories of yesterday, celebrate the happiness of today and look forward to new hopes and joys for a beautiful tomorrow.