A challenging year ahead for the confident actress Jiah Khan, says Ganesha. Going against the grain is never easy; being unconventional requires exceptional courage. And, when it comes to the beginning of a career, most would want to play it safe. However, Jiah Khan, the UK based Indian actress, chose to be different. All of eighteen years, she debuted opposite the much-older Bollywood super-hero Amitabh Bachchan in the year 2006. The movie was the very controversial Nishabd! The film failed to work its magic at the box office, but it did bring confident Jiah recognition and limelight, especially in form of a Filmfare Best D?butante nomination. The movie’s atypical plot, dissimilar to the usual formula films, did generate a lot of hype. But, did the same result in young and decidedly talented Jiah getting branded for the times to come? Maybe! Jiah, of sensuous curly mane and large, expressive eyes, did feature in a few films including Ghajini and Housefull, but largely failed to make a mark.

Jiah has completed A levels in Film Studies and Literature from London, and it seems that there’s much more to her than her sensuous looks. What has stopped her from making it big in the Indian Film industry? Will she be dismissed as yet another pretty young thing? As she celebrates her 24th birthday on 20th February 2012, Ganesha, with the help of Vedic Astrology, looks at the natal chart of this hot actress with immense yet untapped potential. 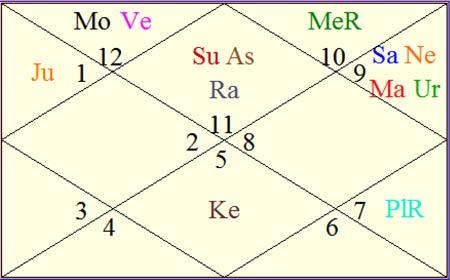 Ganesha wishes Jiah many happy returns of the day in advance.