Born from a real-time need felt by erratic power supply by the founder Shri Tulsi Tanti, Suzlon Energy is today world’s fifth largest wind turbine supplier. India’s largest renewable energy facilitator, Suzlon Energy has been leading the wind energy market in India for the past 15 years with nearly 50 percent YoY market share. The company has eight manufacturing facilities across the country, and over 10,000 employees-strong work-force globally.

Incorporated on 10th April 1995, Suzlon is listed in the share markets. However, despite a huge backing of a continually growing market-demand, the fortunes of the company have kept a chequered path. In 2014’s last quarter, its stocks faced rising losses. But, in a redeeming turn of fortunes, very recently Suzlon struck a deal with Sun Pharmaceuticals’ founder Dilip Shanghvi, who agreed to buy a major stake in the company, which promises to raise Suzlon’s failing liquidity fortunes. Suzlon Energy is also hoped to be play major role in PM Modi’s ambitious ‘2020 Make In India’ campaign. Keeping the latest developments in mind, Ganesha takes a look at the energy giant’s Foundation Chart, cast basis its incorporation date, to predict the way ahead. 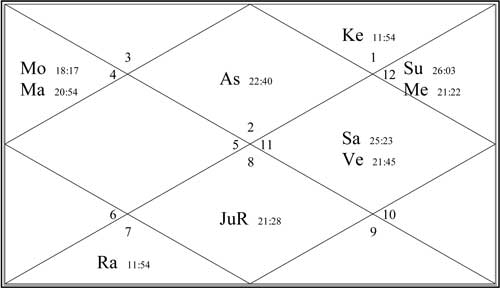 The Positives
The Chart created for Suzlon has Taurus Ascendant. And, the Ascendant Lord Venus is placed in the 10th House – the House signifying professional destiny, social success and mother (in this case, the founders), which indicates excellent fortunes. However, Venus is placed along with Saturn in the 10th House. Although, this may be the reason behind the company’s gradual growth, Saturn’s placement here also indicates concrete and stable future progress. Note that since Saturn is the Yogkaraka planet for the Taurus Ascendant, Saturn is destined to bring good results for this organisation – in the long-run. Moon and Mars are in a combination in the 3rd House in Suzlon’s Incorporation Chart, which is an added positive.

The Negatives
From the inception itself, the Finance Lord in this Chart is placed in the Gains House. But by this placement, the Finance Lord gets debilitated, it being in its Sign of Debilitation – and, the entire equation turns negative for the company’s financial fortunes. Also, in Suzlon’s Chart, the 8th House Lord Jupiter is posited in 7th House in the retrograde position.

Additionally, the transiting Saturn is passing through the company’s 7th House – the House of Partnerships – which implies that any new alliances forged at this time may take time to stabilised. But, they are likely to be long-lasting, given they survive the initial struggle.

On a very positive note, the transiting Jupiter is currently passing over Suzlon’s Mars-Moon combination in the 3rd House, which is a positive indication, and will help the company set up its subsidiaries. From July 2015 onwards, Jupiter will transit through Suzlon’s 4th House, and in the next transit, its will pass through its 5th House – both of which are going to be extremely positive for Suzlon and its stocks. Most notably, Suzlon enters its Venus (Lord of Ascendant) Mahadasha from around 16th March 2017, which is going to be a great game changer for the organisation.

Advice to Investors
Keeping all the aforementioned planetary configurations, it is visible that Suzlon Energy’s long term future, especially after the year 2017, is quite bright. This is a clear indication that patient investors with a long-term perspective shall benefit from investing in these stocks.