Indian economy may find it difficult to free itself from the clutches of inflation.

Inflation, in simple words, may be defined as the rise in prices of goods and services over a period of time. As we say that inflation has been rising today, it means that the number of goods and services a person is able purchase with a unit of currency today is less than what he earlier could. Inflation not only affects the global and national economy, but also has far reaching affects on a common man. It severely affects the common man, as it raises the prices of basic necessities, reduces the purchasing power of money, and thereby increases the cost of living. Moreover, in the countries like India,
where the middle class and lower-middle class form majority of the population, inflation puts a backbreaking burden on the common man.

Moreover, rising inflation affects the prices of shares in the stock market and valuation of the companies. Some companies can afford to raise the prices of the goods and services they provide, but some may not, as  they have to provide competitive prices to their customers/buyers in order to compete with their rivals who don’t have to change the prices due to inflation. Besides, inflation does have an adverse impact on the nation’s as well as common man’s savings. As people have to spend more, they are unable to save money. Less savings implies less investment; less investment means slower progress; slower progress means even lesser savings, and thus the vicious circle never ends. Inflation is indeed a devil that needs to be controlled and reined! Various factors affect the inflation rate, and controlling them means controlling the rising inflation rate. However, it is not at all easy to control these factors. In fact, it is a lengthy and a much complex process.

Although, the Indian government has been trying to control the inflation rate, this has proved to be a mammoth task. Today, when the world looks at
India with huge expectations, and in fact it is expected to be the next economic giant within next couple of decades or so, the ceaselessly rising inflation rate poses a serious threat to nation’s financial progress. Will under the leadership of Hon’ble PM Manmohan Singh and Hon’able FM Pranab Mukhraji the Indian government be able to control the inflation rate? Will the common man’s struggle against price rise continue? Or will the government be able to find out a solution in near future? Ganesha finds out. Read on to know what Ganesha has predicted for the Indian economy and inflation rate. 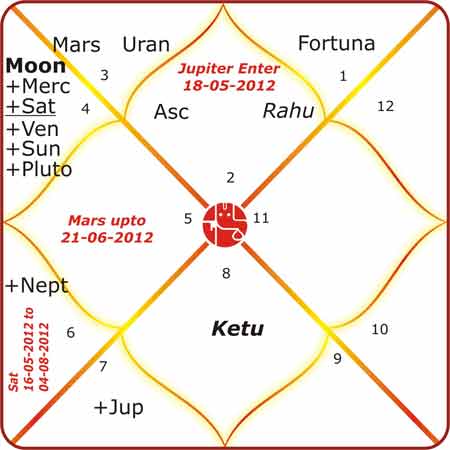 Ganesha analyses the chart of Taurus rising Ascendant with Krutika Constellation. Rahu is in conjunct with the degrees of Ascendant. Mars is posited in second house whereas Jupiter is in Sixth house. Ganesha observes a stellium of six planets in third house.

Mars should be considered as an inauspicious planet as far as Independent India?s chart is concerned. Mars, the Lord of the 12th and 7th House, is going to remain in the 4th  House till 21/06/2012. On the other hand, the 5th House is going to be afflicted by retrograde Saturn between 16/05/2012 to 04/08/2012. Here, the 10th House also needs to be considered, as it represents political movements and administrative acts of government. Besides, the Lord of this House is Saturn and is in retrograde motion. Therefore, some major events are likely to happen on this front.

But, Ganesha is positive and doesn’t see the need to become distressed and panicky. The reason for His optimism is Dashanth Sun. Independent India is currently under the influence of Sun’s Mahadasha, and shall continue to be in that state till 10/09/2015. Moreover, India is going to be under the influence of Jupiter’s Antardasha till 16/07/2012 and Sun’s Pratyantar Dasha till 22/04/2012. The advantageous period can be attributed to Sun’s Mahadasha. Moreover, Jupiter will enter in Ascendant from 18/05/2012