Reliance Infrastructure, the largest private company in the power sector in India is one of the top-notch companies in the country. Previously known as Reliance Energy, the company is a part of the Anil Dhirubhai Ambani Group (ADAG). The company deals in the Energy, Infrastructure, and Engineering and construction sector and has a number of prestigious and important projects under its belt. The metro rail project in Delhi and Mumbai, the airport project, currently under progress in Maharashtra, and the power transmission project are just a few names in the long list of the Reliance Infrastructure’s undertakings. 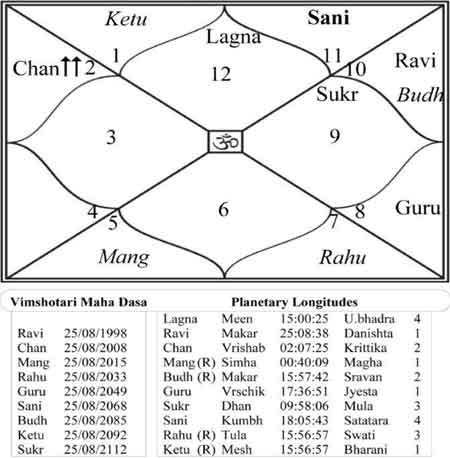 Pisces is the Ascendant of Reliance Infrastructure. Moon is exalted in the 3rd House in the zodiac Taurus. The planetary positions in the horoscope suggests that Reliance Infrastructure will perform well in future. As per the horoscope of the company, Ketu is posited in the 2nd House of finance. Jupiter transit in the sign of Aries is also happening in this House. The 2nd House signifies commercial affairs, trade and stock shares of the company. The strength of the 2nd House denotes the relations of the company with banks and other financial institutions. This House gives an idea about the financial soundness of the company, its ability to bear expenditure and capacity to generate profits. For any company, finances are very crucial, as their strength decides the rise and fall of the company. In this case, the 2nd House is going through the Jupiter transit. So it can be said that the times are going to be good for Reliance Infrastructure. But the House also has natal Ketu, therefore, the Jupiter transit may not have the desired impact.
The times may neither be extremely positive nor disappointing.

The Saturn transit in the 7th House in the sign of Virgo has significant importance. The 7th House denotes relations of the company through contracts and trade agreements, competitors and their activities. It also signifies all the activities related to the business and trade. It depicts professional acumen of the company in handling intricate and complex issues. The 7th House is also indicative of the growth and development of the organisation. But Saturn may dampen the intensity of such results.

You may notice high volatility in the Reliance Infrastructure scrip between 31st October, 2011 and 21st June, 2012. It is advisable to get away from the scrip between 22nd June, 2012 and 01st December, 2012 and
book profits.