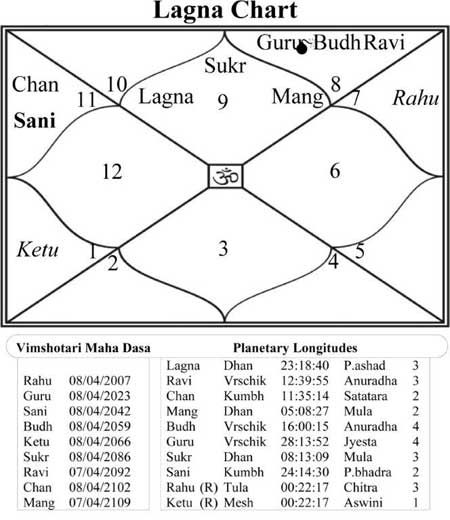 According to the company's horoscope, it has Sagittarius ascendant with Venus and Mars placed in the ascendant House. Mars, which is posited in the 1st House in Reliance Capital's Horoscope is the 12th House and Lord of the 5th House. Lord of the 12th House connotes the functioning of the management inside the company. There are chances of formation of a nonconformist group within the hierarchy. The company may resort to general mobilisation of the employees to diffuse the issue. But, Mars being the Lord of the 5th House may support the company in many aspects. The Lord of the 6th House is Venus and here, the 6th House connotes intraday, hurdles, court cases and liabilities. But, at the same time 11th House is considered to be the House of gains. Thus, the Horoscope of Reliance Capital shows mixed results. Venus may depict peace and harmony in the organisation, and may also result into increase in productivity. However, Ganesha foresees a possibility of this productivity coming to a halt as some government policies may take an unhelpful turn.Lord of the 7th and the 10th House, Mercury is posited in 12th House in combusted position. So, the afflicted Mercury may yield unfavourable results. The speculative activities may not yield fruitful results as desired. The financial  business may undergo a tough time. The venture may run into losses despite heavy investments.Jupiter, the ascendant and the Lord of the 4th House, which is posited in 12th House may prove beneficial for FII money flow. However, when Jupiter is posited in the 12th House, it is not considered to be a good position because along with huge profits it may also cause heavy expenditures.What next?Natal's Mercury, Jupiter and Sun are posited in the zodiac Scorpio, its 12th House. Rahu transits in Scorpio on 7th June, 2011, and it may bring negative results for the company. The passage of Rahu through the natal's Sun is not considered to be favourable for the head of the company. The work culture does not show any improvement and the liabilities of the company may not be  discharged. On the other hand, Jupiter transits to Aries, the company's 5th House, in May 2011 may prove supportive. Thus, Ganesha feels that one should book profits at every jump.Reliance Capital Graph