Ganesha foresees the Union Budget 2012-13 to be full of ifs and buts.

Hon'ble
Union Finance Minister, Pranab Mukherjee will present the Union
Budget for the year 2012-13 in the Parliament on 16/03/2012. The
Budget will take into account the available resources and will aim at
raising the Gross Domestic Product (GDP) growth rate to new heights.
Expectations are always high from the Union Budget, but this year the
expectations are even higher due to an exemplary increase in
inflation as well as a widening fiscal deficit. Like every year, this
year too, people are eagerly awaiting the annual Budget announcement.
As usual, there is a lot of hope and anticipation among the common
man. People will expect the government to give some relief in the
existing policies.

A
number of reasons, such as the fiscal deficit suggested in the
monetary policy of RBI, measures to control inflation, so that the
GDP growth rate is maintained and does not go below 7%, measures to
control the interest rate etc. are responsible for the current
financial problems of India. Besides, high
government expenditure, unsustainable subsidies and steep interest
payments have added to this burden.
Will Finance Minister be able to stand up to the hopes of millions of
Indians? Well, this question will be answered on 16th
March, 2012, when the the Union Budget 2012-13 shall be presented in
the Indian Parliament. On that day, it will be disclosed whether the
Union Budget 2012-13 will favour or frustrate the common man. 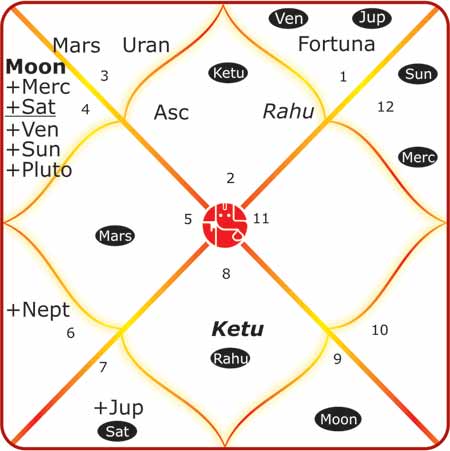 As
per the Kundali of independent India, Sun is the Lord of the 4th
House and it is in the 3rd
House in the zodiac sign Cancer. On the day of the Budget
presentation, the natal Sun is transiting through zodiac sign Pisces
in Purvabhadrapada Nakshatra (constellation) with debilitated Mercury
in the House of gains. This suggests that software companies working
for the software and finance of the Banks' infrastructure are likely
to be in focus.

Mercury
and Venus are associated with the Automobile sector. Recently, the
crude oil prices in the international market have distinctly gone up.
In India's Natal chart, Mercury is the Lord of the 2nd
and the 5th
House. On the day of the Budget presentation, Mercury will be
retrograde and with Sun in the 11th
House, in the debilitated sign Pisces and will be transiting through
the constellation of Saturn. Venus, in India's Kundali, is the
ascendant and the Lord of the 6th
House. Venus, on the day of the Budget, is transiting through the
House of loss and also from its own constellation, Bharini. However,
in the Navmansh Kundali, it will be transiting through the
debilitated sign, Virgo. Therefore, the Automobile secotrs may not
have any direct and favourable influence of the Budget. However, the
Finance Minister may induce some positive movements in the aforesaid
sector, foresees Ganesha. The future of the Automobile sector looks
set to be promising. But, overall, the Union Budget 2012-13 will
neither benefit nor harm the Automobile industry.

The
Pharmaceutical sector is represented by the Sun. In India's Natal
chart, Sun is in the 3rd
House, in the zodiac sign Cancer. On the day of the Union Budget
2012-13, the natal Sun is transiting through the zodiac sign Pisces
and constellation of Jupiter. As a result, the Pharmaceutical sector
will experience some powerful and long-term influence of the Budget.
Moreover, in the upcoming Union Budget, businesses related to the
production and R&D (research and development) of medicines for
liver, diabetes, pituitary gland, blood disorders and circulation,
obesity, heart enlargement are going to be in focus. Apart from
these, vaccines and bulk drugs are also likely to be in focus.

As
per Vedic astrology, Mercury represents the Banking sector. In
India's Natal chart, Mercury is in the 3rd House, in the
zodiac sign Cancer. On 16/03/2012, natal Mercury is debilitated in
Pisces, the sign of Jupiter, and is transiting through the 11th
House. Moreover, it will be moving through Saturn's constellation.
This movement may prove to be challenging for the Banking sector, as
retail loan, deposit rates, rise in savings deposit rate, and
property valuation may get affected by it. However, the sector itself
is going through a favourable phase, there are chances that a
proposal to increase the numbers of branches and ATM machines will be
put before the Parliament. The Finance Minister may concentrate on
the performance of Public Sector Unit (PSU) banks and insurance
sector in the upcoming Union Budget, notes Ganesha. When, during the
course of the year ahead, Mercury gets disturbed, this sector may
experience its negative consequences. But, overall, there will be no
major highs or lows in the Banking Sector, foretells Ganesha.

This
sector is ruled by Mars. In India's Kundali, Mars is in the 2nd
House, in the zodiac sign Gemini. On the day when the Union Budget is
going to be presented, natal Mars is going to be retrograde in the
4th
House and in the constellation of Venus. The planetary position is
likely to lessen the benefits that Infrastructure-Cement and Real
Estate sector business should get otherwise or the corporate
companies associated with this sector would express their
disappointment about the business. In the Cement industry, the burden
on the cost of raw material is likely to increase, and therefore the
government may have to increase the fuel cost by 8 to 10 rupees per
50 Kg. bag. To sum it up, Ganesha says that the Cement sector may go
through difficult times during 2012-2013.

Saturn
and Mars represent the Metal and Steel sector. These two planets are
in a retrograde motion on the day when the Union Budget is going to
be presented before the Parliament. Whenever a planet is in
retrograde motion, its basic characteristics and elements
behave/react in a uneven pattern. Therefore, as far as this sector is
concerned, Mr. Pranab Mukherjee is likely to give some odd and
perplexing results.

Venus
represents the field of entertainment. Venus is the Lord of the
ascendant and the 6th
House, and is transiting through the 12th
House in its own constellation, Bharini. But, in the Navmansh
Kundali, it is in the debilitated sign Virgo. This suggests that the
Radio industry will maintain its growth rate. Moreover, companies
related to broadcasting are also likely to get benefit by such a
planetary position. Ganesha foresees that the Finance Minister is
likely to implements new policies for new television channels. The
growth in this industry is likely to be more quantitative than
qualitative. While forming the policies for this sector, revenue
generation in the main Indian languages, circulation income, printing
cost, and average cost are also likely to be considered, foretells
Ganesha.

The
Telecom industry is still in the clutches of 2G spectrum scam, and it
ha been an interesting period. Coming back to astrology - the Telecom
sector is ruled by Mercury, which is the Lord of the 2nd
and the 5th
House. In the Natal chart of India, Mercury is in the 3rd
House. On 16th
March, when the Union Budget is going to be presented, natal Mercury
is going to be retrograde and debilitated Pisces and in the
constellation of Saturn. Therefore, expect a number of unexpected
changes to happen in this sector, says Ganesha. The Indian government
is likely to focus on following matters.

Therefore,
if we look at the Telecom sector with a long-term perspective, the
condition looks favourable. The Finance Minister is likely to present
a reform-based and performance oriented budget for this sector. In
short, the coming year is likely to be positive for the Telecom
industry.

Rahu
and Ketu represent this sector. In India's Birth chart, Rahu is in
the ascendant, and therefore this sector always remains in the news.
On the day of the Union Budget presentation, natal Rahu is transiting
over Ketu and natal Ketu is transiting over Rahu. So, overall, the
Budget may prove to be encouraging for this sector, foretells
Ganesha.

Due
to the policies made by the Finance ministry, the price per ton may
increase, and as a result, the companies related this industry may
also have to change their prices. Although not all the stocks will
bear the impact of this, but some particular shares will search for
value.

On
the day when the Union Budget 2012-2013 will be presented, the Stock
Market and Mercury, the Lord of gains' House, is retrograde in a
debilitated Sign. However, Sun is with Mercury, and Mercury is
forming an aspect with its own House. Therefore, in 2012-13, IPO
related market would continue to create a hazy picture, predicts
Ganesha. Besides, on March 16, 2012, Sun's weightage and the day's
weightage, both are zero. And that's not all, says Ganesha. As per
the monthly graph, the weightage for the month of March is also zero.
Therefore, the year and the current month look set to be volatile and
unstable. You are advises to take the support of hedging, especially
when the weightage is zero, says Ganesha, as the market becomes
one-sided during such times. The following data will give you a
clearer perspective on this.

Moreover,
on March 16, 2012, Saturn will be exalted in Libra and Mercury will
be debilitated in Pisces. Apart from that, Mars, Saturn and Mercury
will be retrograde. This is how the three major planets are going to
be in the day when the Union Budget is going to be presentation
before the Parliament. Considering this unique combination of
planets, Ganesha advises the investors to trade and tread carefully.

Here,
Ganesha gives you a list of dates around which the times are likely
to be highly volatile, fluctuating and unpredictable. Some
undesirable events, such as earthquakes, tsunami, terrorist attacks,
floods, etc. are likely to happen around these dates, and would
clearly and directly affect the stock market. 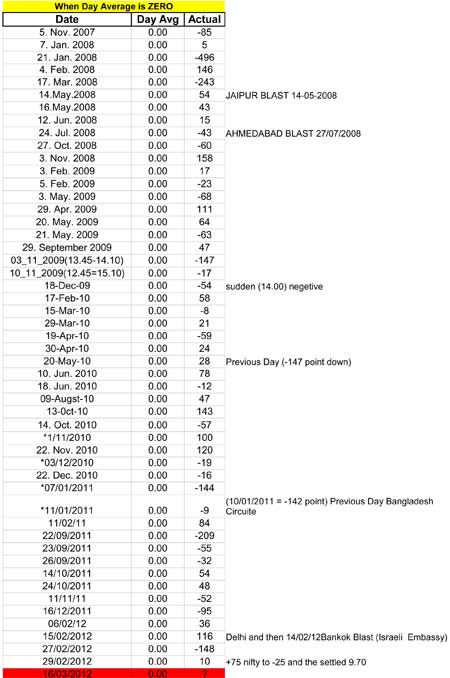 Here
are the dates around which the stock market is likely to be very
active, full of ups and downs and extremely volatile.

Dates
on which the stock market is likely to be highly fluctuating,
volatile and active in 2012

Ganesha
foretells that on 16/03/02012, Nifty will give you an opportunity to
do jobbing. Rather than hoping and waiting for huge returns, make
frequent entries and exits with minimum margin, advises Ganesha.

Till
now, eleven times the Union Budget were presented in the month of
March details of which are as below.

On
16/03/2012, Moon is in the Purvashadha constellation, in Sagittarius,
which is a Fire sign.

Till
now, nine times the current market budget were presented in a Fire
sign i.e. Aries, Leo and Sagittarius.

Therefore,
rather than F&O, you should buy and sell specific stocks as it
would help you set off the loss of 2011-2012, advises Ganesha.