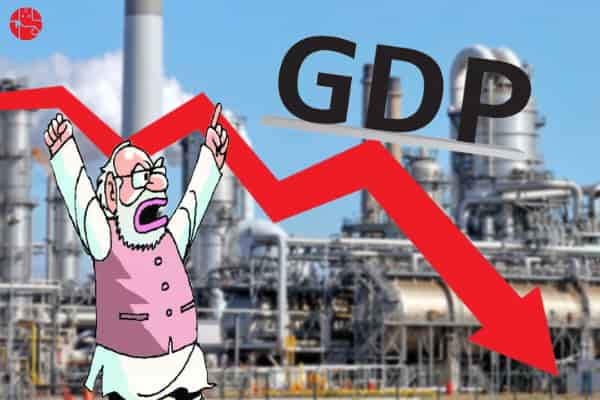 Shocking results have come out in the quarterly economic growth rate data released by the National Statistics Department. The Gross Domestic Product (GDP) rate fell to 4.5 per cent in the second quarter of the current financial year 2018-19. This decline is the biggest decline in the Indian economy in the last 6 years. The decline in the production of basic industries is believed to be the reason behind this huge decline. Basic output growth data released in October showed a decline of 5.8 percent. Six of these basic industries, which include coal, crude oil, cement, natural gas, electricity and steel, recorded a decline. The reduction in the output of these core industries is like alarm bell for a consumer based economy like India. There are many aspects of the economic challenge emerging before India in the present era, on which economists across the country are contemplating. But such a cause, which affects the country, the world and the entire universe equally, that aspect is not being noticed at the moment. The direct effect of planets, constellations, signs and dasha-mahadasha affects every person and organization. The experienced astrologers of GaneshaSpeaks have tried to understand the falling graph of the economy through Vedic astrology. Looking at the auspicious and inauspicious aspects of the horoscope of India, we only analyzed the economic situation and the facts that came out are really shocking.

Vedic astrology is the only accurate means of understanding the planets, their position and influence. At present, the transit of Rahu is going through the house of wealth. Rahu is the most sinful planet. The transit of Rahu in the money house of the horoscope has an adverse effect on the financial condition. When such a situation is created in the horoscope, then the economy has to face ups and downs and challenges from all sides. Probably due to this effect, the infrastructure industries are also seeing a decline. In the latest data released by the government, coal production declined by 17.6 percent, electricity production by 12.4 percent, cement production by 7.7 percent, natural gas by 5.7, crude oil by 5.1 percent and steel production by 1.6 percent. Agriculture, forestry and fisheries and mining and quarrying registered marginal growth of 2.1 and 0.1 per cent respectively during this period. Simultaneously, the growth rate of refinery products fell to 0.4 percent. At the same time, in the last year 2018-19, an increase of 4.8 percent was seen in the production of these eight industries in the basic sector.

Positive and negative aspects according to the horoscope

The transit of Rahu and the conjunction of Jupiter are going on in Chandra Mahadasha. Jupiter is the lord of the eighth house and transiting Jupiter is also visiting the eighth house. An inauspicious combination of planets is being formed here. From date 11-03-2020, there is a possibility of improvement in the economy in the conjunction of Saturn and Mercury in the dasha of Moon.

The positive aspects that came out after studying the horoscope of India are that Venus, the lord of the ascendant house, Moon, the lord of the mighty house, Mercury, the lord of wealth, Saturn, the lord of luck and karma, is the lord of happiness and peace. Swami is sitting with Surya. Which works to give stability to India under any circumstances.

With this, this year will prove to be important for recognizing cash flow, income and earning power. During this, you will have to try to increase your income more practical and wiser than your ability. This will prove to be a strong time for wealth and property, apart from personal values. This means that along with increasing money and property, it can be said to be a good time to raise personal values ​​as well. There are good chances of getting profit from the investments made in the past.

Talk to our expert astrologers for personalized advice to improve your financial situation now!

The negative thing is that Rahu is sitting in the first house and Ketu is sitting in the seventh house. Which leads to taking wrong decisions from time to time, due to which the economy remains in danger of collapse. There may be an atmosphere of tension in the country due to some financial matters. But these conditions will gradually improve. However, despite the improvement in the economy, there will be a shortage of money in the government coffers. During this, policy makers are advised not to spend more than necessary. In short, this time is not financially satisfactory. Financial management can be difficult and turbulent. Finance and investment will have to be given more attention. Taking loans or creating new liabilities during this period is not a good sign.

After the release of the data by the National Statistical Department (NSO), many influential economists of the country and the world have expressed concern over this. Former Prime Minister and well-known economist Dr. Manmohan Singh, during his speech at the National Economy Conclave, described these figures of the economy as disappointing and unacceptable. Our growing at that point of time at 4.5 per cent is very worrying. Singh blames demonetisation and poor implementation of the Goods Service Tax for this situation. He and many economists believe that the consumer driven Indian economy could not tolerate sudden and successive economic changes one after the other and this led to the big decline in basic industries.

Unlike many economists like Manmohan Singh, many economists believe that this fall in GDP is the last fall. There is now hope for improvement in the coming third and fourth quarter results. Behind this, the efforts of the government to bring the economy back on track are believed to be the reason, in which relief in corporate tax, relief package to banks and relief given to real estate sector is being considered as the main one. The current data also indicates that India will improve its economic performance in the coming quarterly results. Behind this is the same data which is very important for our economic growth. The results of the second quarter of the current financial year showed a significant improvement in public spending figures. In the second quarter results, the public expenditure figures have increased from 8.5 to 11.5 in the previous quarter, which means that demand will increase in the coming times, industrial production will increase when demand increases and the economy will get back on track due to the recovery of falling industrial production. Looks like a lot of chances. To handle the current economic decline, along with the government, the RBI has also tried to improve the economy with many big decisions and changes. It is expected that the RBI will give some relief in its monetary policy, which is issued every two months, so that the bank can lend more amount to the consumers and that money should come in the falling economy and work to support it.

To get your personalized solution, talk to our expert astrologer now!