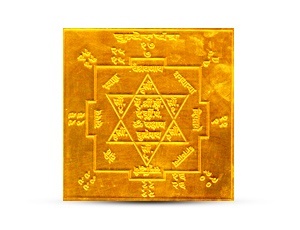 What is a Yantra?
A Yantra is a geometric design engraved on a metal plate (copper, silver or gold) to invoke the energies of a specific deity in order for the worshipper to acquire all the material and spiritual benefits associated with that particular deity. There are myriad designs meant to propitiate myriad deities, and if the worshipper meditates on an energised Yantra as prescribed by a qualified spiritual master or a very competent astrologer, it has the ability to fulfil any and all desires of the worshipper, both material and spiritual. Gold, being denser than silver or copper, is considered the best metal to make a Yantra as it absorbs and retains the maximum amount of energy.
A Yantra is a Talisman, or a powerful Holy Symbol, and a tangible manifestation of a Mantra or Deity itself/ himself. It creates an active (positive) energy field that harnesses and radiates positive energy, and transmits that powerful energy to worshipper, wearer or the environment, where installed. ‘Yantra’, as used in the Vedic context, actually is a Sanskrit word, derived from the root “Yam”, which means ‘to control’, ‘to subdue’, ‘to restrain, curb or check’. In other contexts too, in Sanskrit, the word ‘Yantra’ refers to any instrument employed for holding, restraining or fastening. In its another meaning, it implies a mystical or astronomical diagram, said to have magical powers. In Vedic context, this ‘Yam’ refers to ‘holding’ of an idea or concept and ‘restraining’ a particular kind of desirable energy or energy field. The suffix ‘-tra’ in the word ‘Yantra’ is known to have been derived from the root word ‘trayoti’, which means “liberation” (it is same as used in the words – tantra and mantra).

A Yantra provides a focal point that is a window into the abstract absolute, or a path to liberation. When you focus on it, the mind becomes calm and silent, opening the mind’s door wide open to let in divine vibrations. It is said that the ardent worshipper can attain union with God by simply meditating on a Yantra. It is immensely helpful even for those who are not so spiritually inclined, and wish to gain worldly riches and fame. The Yantras are often designed to propitiate a specific deity, and so by tuning into the different Yantras you can tap into the energies of the deity of your choice and obtain all the blessings that this deity has to offer. For instance, if it is wealth that you wish to acquire, you need to worship a Yantra designed to propitiate Kuber, the God of wealth.

As per the mythologies, Kuber was a simple man, not too good-looking, but a great devotee of Lord Shiva. He worshipped Lord Shiva for many years, after which the Lord appeared in front of him in person and granted him the custody of all the wealth in the world as per his desire. Being a person of modest means, Kuber was thrilled with the boon. However, by and by the boon went to his head, and he became greedy. He wanted to make more and more money. He forgot that he was just a caretaker and not the owner of the wealth.

When Shiva found out about this greed of Kuber, he sent his son Ganesha to a feast arranged by the latter for all the Gods, to teach him a lesson. Ganesha arrived before any other God and ate up everything Kuber had prepared for the feast, and, still not satiated, Ganesha ate up all Kuber’s accumulated wealth, then his palace, and then when as he was preparing to eat Kuber himself, Lord Shiva appeared and made Kuber realise his folly. Kuber apologised and vowed to never again misuse his power. Thenceforth, Kuber has been known as the God of wealth, and praying to him sincerely by following all the rituals prescribed in the Vedas, you can attain all the wealth and riches you desire.

How to meditate on the Kuber Yantra?

The Nine Planets and Laxmi Sadhana