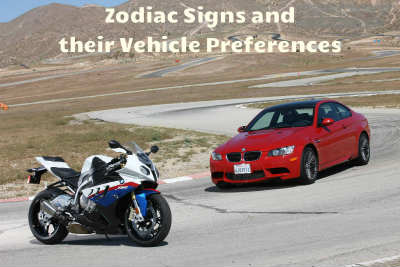 Sun Signs and Their Choice of Vehicles

Aries: A fancy bike? Now, isn’t that a basic necessity of life? Arians lose their sense of priorities when in the midst of jazzy bikes and fancy cars, says Ganesha. Even if it means mortgaging their dysfunctional car, they will go ahead and do it. In short, they own the hottest set of wheels in the market.

Taurus: Give them a Harley Davidson and they’ll come up with at least four reasons why they are not happy. They will be shockingly in love with their possessions, though in reality their stuff is nothing really great. Never tell them or they will pluck your eyeballs out, warns Ganesha! They are ultra possessive.

Gemini: According to Ganesha, Geminis are not brand conscious. So the first model the talkative salesman shows is fine for them. Functional, economical and practical is what they go for. No wonder, your neighbourhood Gemini still uses his old rickety scooter.

Cancer: Cancerians are just bothered about being on this side of the haves and have-nots division, says Ganesha. If they’ve got to have a car, they will. Never mind if it’s a used one, has torn upholstery and emits gases by gallons. They just need a car – some car – to get by and they are happy with what they have.

Leo: Leos have the latest in the market. These flamboyant creatures go for bright and sometimes gaudy colours too. As long as they catch people’s attention – an absurd horn or a bad exhaust pipe – they are ready to do anything. Their vehicles are bound to have loud and hilarious bumper stickers on them. But one thing is for sure, they not compromise on luxury and grandeur, so a car or a bike with an astronomical price tag won’t matter to them, says Ganesha!

Virgo: Virgos are rather experimental in gadgets. Those who love to remodel their bikes, try out convertible cars, and go for the limited edition models are more often than not true blue Virgos. They are bike/car connoisseurs. Theirs are the best-maintained automobiles among all the signs.

Libra: Librans are not passionately interested in mechanics and automobiles. In fact, they would have their vehicles passed on to them as a legacy. They seldom have the initiative to buy one on their own. No wonder, their stuff is badly maintained.

Scorpio: Scorpios believe in convention when choosing their bikes/cars. Instead of trying out the funky new version of that imported car, they prefer buying the trusted but Indian made ones. So they usually own a popular but old model.

Sagittarius: They are a lot like Scorpios. They too believe in functionality and would not want to spend fancy amounts just for one extra feature. They also don’t think futuristic, instead settle for something contemporary. Planning ahead is not their trait. But, their vehicle choices may tend to be unconventional, says Ganesha.

Capricorn: Never go with a Capricorn to buy a bike/car. They will spend so much time and energy studying every part that by the time the selection is made, the model would have become obsolete. But that is not of concern to them. Perfection is their prime demand according to Ganesha. Capricorns are known to have a penchant for vintage vehicles.

Aquarius: They don’t use their vehicles often, but nevertheless they are awfully possessive about the same. They are the ones who have their names written all over their bikes. More as an attempt to reclaim it rather than use it. They are likely to go for the latest model in town, rather than going for vintage class.

Pisces: They often make bad drivers and that shows in their bikes. A broken rear view mirror, a disfigured bonnet, dysfunctional horn, it’s all there in the Piscean’s stuff. What’s worse, they refuse to get it repaired. But they love travelling in their own conveyances and would generally prefer to buy attractive vehicles.