Types Of Opal – Characteristics And Colours of Variety Of Opal 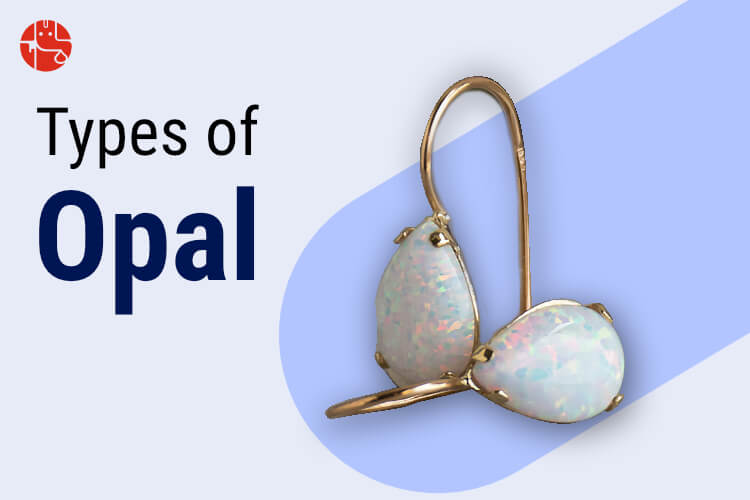 Different Types Of Opal – Uses And Benefits Of Opal Stones

About The Opal Stone

The opal stone is one of the world’s most valuable and rare gemstones. It is so appealing and desirable that no one can resist purchasing the different types of opal for different occasions. It is a semi-precious gemstone with many properties. It is a sign of trust and reliability. Numerous opal stone benefits can also be found in astrology. As a result, it is known as the “Queen of Gems.”

Opal is derived from the Sanskrit word Upala, which means “precious stone,” and the Greek derivative Opallios, which means “to see a colour transition.” This stone is also known as a birthstone, and it is usually given to commemorate the birth of a child or the 14th year of marriage. As silica-rich water seeps into deep cracks and voids in the Earth’s crust, opal is formed.

The most sought-after spectral colours in the opal are red, orange, and yellow, which command higher prices. Blue and green are less common colours, but they are still lovely.

Opal White
The most common opal variety is this one. It has a white backdrop, is translucent to sub-transparent, and typically has opalescence. All of the spectral colours will be visible in the best examples. It is no longer considered as important as black opal.

Fine white opal, on the other hand, continues to command high prices and is extremely appealing. White opal is mostly found in Australia’s Marla and Whitecliffs regions, but it’s also found in Hungary, Ethiopia, and Canada.

Black Opal
This variety, which has a black body colour and little to no opalescence. The black backdrop makes the yellows, oranges, and reds stand out against the dark background, supposedly enhancing the colour action.

Natural Opal
Natural opals are those that have not been handled or enhanced in any way by humans, apart from cutting and polishing. Light, dark/black, boulder, and matrix opals are the most common types of natural opals. Boulder opal has an ironstone backing, but since this backing occurs naturally, it is considered a solid natural opal. The two characteristics of body tone and clarity decide the variety of natural opal.

Boulder Opal
Apart from cutting and polishing, natural opals have not been treated or improved in any way by humans. The most popular forms of natural opals are light, dark/black, boulder, and matrix opals. Boulder opal has an ironstone backing, but it is nevertheless considered a solid natural opal since this backing occurs naturally. The natural opal variety is determined by the two characteristics of body tone and clarity.

Matrix Opal
When the opal is intimately diffused as infillings of pores or holes between grains of the host rock in which it was formed, it is referred to as matrix opal. The ironstone host rock distinguishes boulder matrix opal from other types of opal found in Queensland.

Black Opal – The Most Expensive And Rarest Variety Of Opal

Black opal has a black (or dark) body colour, making it the rarest and most valuable type of opal. Any colour of the rainbow can be found in black opals. The rich and vibrant colours on the opal’s face are enhanced by their dark body tone.

Black opal is one of the most enthralling stones on the planet, prized for its nearly endless spectrum of colours. Black opal contrasts several different colours with a dark body tone, unlike common opal, which is normally one colour. You can put the thing away for a week, then take it out and look inside, and you’ll always find stuff you’ve never seen before.

Black opal of high quality will cost more than $10,000 per carat, making it one of the most expensive gemstones on the planet. However, extracting black opal is a difficult task. A miner may not find a single gem after spending tens of thousands of dollars. Australia produces more than 90% of the world’s opal. And Lightning Ridge is where you’ll find a lot of black opals. For over a century, miners have been looking for opal in this region. Finding black opal is difficult even for experts.

The world’s most expensive black opal, the “Aurora Australis,” was discovered in 1938 at Lightning Ridge. The harlequin pattern on a cut and polished stone is dominant red, green, and blue colours against a black backdrop. It measures 3 inches by 1.8 inches and weighs 180 carats. The opal’s rarity is due to its size and solid, vibrant colour play. It measures 3 inches by 1.8 inches and weighs 180 carats. It was discovered on an old seabed and had the distinct appearance of a starfish on its back. In 2005, it was estimated to be worth AUD$1,000,000.

Australia’s Fire
It is priced at nearly $900,000 and is considered the finest uncut opal. The South Australian Museum has the 998-gram stone on display.

The Rainbow Of The Virgin
This $1 million opal is the most valuable in the world.

The Queen Of The Flame
With a blend of red and blue-green opal and reflecting different colour variations, the Flame Queen weighed 253 carats and measured 234 inches by 2 1/3 inches. In 1980, it was sold for $1 million.

Want to know what kind of opal is right for you? Consult an Astrologer now!

Types Of Opal – Healing Properties Of Each

An Opal Stone possesses magical powers to cure and support its wearer in amazing ways, thanks to the vested powers of the planet Venus. This gemstone’s powers not only cure physical ailments but also strengthen a person’s spiritual abilities.

The following are the top 15 advantages of an Opal:

After reading all about the different types of opal, you now have a better understanding of how opal gemstones can help us in our everyday lives. So, if you’re taken by it, you’ll certainly want to purchase it.