Til Dwadashi 2019: Sesame donation will give freedom from sufferings 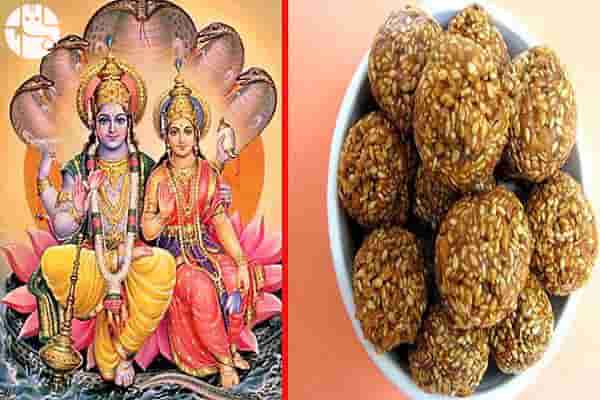 Wishes are fulfilled by bathing in Magh month and fasting on Til Dwadashi.

Til Dwadashi fast is observed on the Dwadashi of Krishna Paksha of Magha month. In the year 2019, this fast will be celebrated on 16 February. Lord Vishnu is specially worshiped on this day with sesame seeds. By bathing and donating in holy rivers on the day of Til Dwadashi, a person gets auspicious results.

The month of Magha is very dear to God

The greatness of Magha month has been described in the Hindu religious text Padma Purana. It has been said that even worshiping Lord Shri Hari does not bring as much happiness as a bath only in the month of Magha. In such a situation, one must take a Magha bath to get rid of all sins and get the love of Lord Shri Hari. It is said that the person who donates sesame seeds to the ascetics in the month of Magha, never goes to hell. Not only this, by fasting on the Dwadashi date of the month of Magha and worshiping God, one gets the result of Rajasuya Yagya.

Like Kartik bath, there is also a rule for Magha bath. If we talk about the month of Magh, then according to the scriptures, every date of this month is a festival. If a person is not able to take bath for the whole month due to illness, then he can observe Magh Snan fast for 3 days or 1 day.

Til Dwadashi gives freedom from sins

Til Dwadashi fast of this month also has importance. Like Ekadashi, if done with complete devotion and devotion while keeping a calm mind with complete purity, then this fast proves all the works of a person and frees him from sins.

On the day of Til Dwadashi, taking the resolution of worship in the morning, worship should be done by chanting ‘Om Namo Bhagwate Vasudevaya Namah’ by Shodashopachar or Panchopchar method. In the morning, after retiring from bath etc., offer salutations to the Sun God and after chanting Surya Mantra, Arghya should be offered by mixing fragrance, Akshat, sesame, water and flowers in a copper vessel.

Importance of Til Dwadashi

On the day of Til Dwadashi, after showing incense and lamp to the Lord, taking bath with fruits, flowers, rice, rauli, Mouli, Panchamrit, etc., God should be offered offerings made of sesame seeds or prasad made of sesame and jaggery. On this day the fasting person should wear yellow clothes. This fast is said to be the form of Lord Shri Krishna himself. Til Dwadashi fasting brings happiness and prosperity, all sins are destroyed. During this, the donation of sesame seeds to Brahmins, Pitru Tarpan, Havan, Yagya, etc. is of great importance. Those who do not fast on this day, if they donate to the poor according to their capacity, then they get auspicious results. Due to the proper worship of Lord Shri Vishnu, there is an increase in the happiness and prosperity of the family.

Every day of Magh month is holy