THE INTRIGUING CONJUNCTION OF SATURN AND MARS: THE TIME FOR TRANSFORMATION AND CHANGE 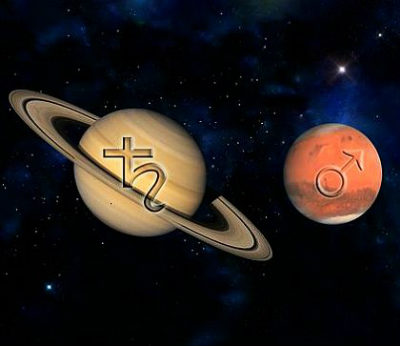 Saturn – the celestial disciplinarian, is a cold and detached planet, which constantly works as a grounding factor, and ensures that we remain in touch with the hard realities of life. By making us go through various hardships, troubles and delays in life, the tough taskmaster makes us realise the importance of being focussed, organised and practical. On the other hand, Mars is a planet, which possesses a nature completely opposite to Saturn. The fiery red planet stands for action, movement, aggression, anger, impulse and speed. While slow and steady is the Saturnine way, rough and rush is the Martian style! Saturn makes a person wait, watch, plan, contemplate and act, Mars makes one act immediately, without getting into the details. Thus, the energy that gets generated by this combination can be very tremendous, but also contradictory and thus it can give rise to confusing and challenging situations.

The Important Dates:
Currently, these two planets are in conjunction in the Scorpio Sign, which happens to be the own Sign of Mars. Saturn has been transiting in the Jyeshta Nakshatra from 16th December, 2015 and will be stationed in the same Nakshatra till 12 January, 2017, after which it will enter the Sagittarius Sign. The mighty planet will then be in retrogression from 12 July, 2017 to 8th October, 2017. Mars entered Scorpio on the 21st February, 2016, and will stay put with its adversary in the watery Sign till 18th September, 2016.

The Likely Problems:
This conjunction will give rise to various conflicts, anger issues, differences amongst people, accidents, operations and surgeries and depression problems. There will also be an increase in cases of murder, suicide, road rage, thefts and fire related accidents.

The Positives:
Though this combination is that of planets with contrasting ideologies, it can also make you do wonders by blessing you with controlled energy in a strict and disciplined manner. This combination is a very conducive one for new inventions, research and innovation. This is a period, when we will get to see the old making way for the young and new. In fact, this is the phase of transformation, and for the inevitable – the change to take place, in a much more drastic manner.

You may experience the desire to take part in meditation and do exercises. This a favourable period for activities related to personality development. You may have to deal with various karmic issues which and will also get an opportunity for course-correction and self-introspection. During this period, you will get the encouragement to be more structured, organised and systematic and you will also be able to finish off work before time.

The areas that may get influenced:
There are chances of sudden events taking place in your life and you may gain ancestral property in this phase. This combination will also encourage people to start their own ventures. More people will join the defence forces, the police and sports. There will be an increase in interest in the areas like real estate, medical fields and computers amongst the masses.

It is to be noted that currently Saturn is transiting through the Jyeshta Nakshatra, and this Nakshatra happens to be ruled by planet Mercury. So, amongst the 12 Signs, for Aries Ascendant natives, Mercury rules the 3rd and 6th House, which indicates clearing of unfinished karma and repayment of loans.

For the Taurus Ascendant natives, it may bring great wealth.

The Leo Ascendant natives may get good chances to buy property and to earn wealth.

Saturn in the constellation of Mercury may lead to secret dealing, the sprouting multiple startups, fiery communication and increase in taxes. Saturn is the Karaka of the service industry and employment (jobs), and mercury is the planet of intelligence and change, so, in this phase, we may find people opting for a change in their jobs. They may want to check out various other options.

The Sudden and Unpredictable – the Scorpio Influence
The Scorpio Sign also represents the areas like revenge, mysteries, secrets, trauma, black magic and emotional distress. Saturn’s transit through this dark Sign will generally dig out things of the past and will ensure that various matters reach their culmination point. People will begin their quests for something more meaningful and significant. Also, during this period, people will be made to face their innermost phobias and inhibitions.

Due to an heightened Scorpio influence, there may be an increase of intimate physical relationships and also secret affairs. Two of the negative traits of Scorpio are jealousy and manipulation, and thus our insecurities may get exposed due to the transit of Saturn in the Sign of secrets. Things in general will be under the strict surveillance of taskmaster Saturn, and if even after repeated warnings, we do not mend our ways, then we may be compelled to pay the price. Saturn will teach the subjects, ways to be more honest and true.

It would be extremely beneficial, if you recite the Hanuman Chalisa and offer oil and black urad daal (lentils) in Shani temple. Donating jaggery and yellow masoor on Tuesdays is also highly recommended.