Home Blog Astrology Sun Signs And The Way They Apologise 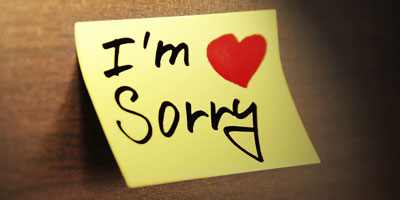 Aries: For starters, Arians think they are so sweet, they could not have possibly said or done things that need an apology. So in the unlikely possibility of them actually going down their knees to apologise, it will be a simple sorry. Nothing less, nothing more.
Taurus: They are so scared to face others when they make a mistake that by the time they resurface to tender an apology, the damage is done. So Taurans end up making foes out of friends because of their laxity in apologizing.
Gemini: Geminis think they are infallible and therefore will never really apologise for anything. But once they realize, they prefer to act as if nothing happened, and behave normally with people who have a problem rather than remind others of the incident by tendering an apology.
Cancer: Cancerians will make you feel sorry for demanding one when they make a mistake. They are the legendary characters that burn hands and slash their fingers in order to display the quantum of their repentance. Their repentance is dangerous.
Leo: Leos are a delightful bunch even when they are trying to make up for their follies. They will go down their knees, buy flowers, put up sorry posters.. do everything colorful to flatter you and make up for their mistakes. In fact it’s fun to induce them to make a mistake and let them apologize for it.
Virgo: Virgos will first formally set aside a time and date and inform them what they want to tell you. Then they will mentally prepare themselves to talk out the same things. They will finally draft the script and read out whatever they want to. In short, even their heartfelt apologies sound like well-drafted scripts.
Libra: They are very vocal once they realize their folly. They never ever hesitate to come clean and admit their mistakes. In fact, they will go out of their way to convince you about how genuinely sorry they are.
Scorpio: Scorpios are formal and think that tendering an apology is more of a formality. So instead of just saying sorry, they will send a formal mail or send a card, whatever it takes to avoid direct confrontation.
Sagittarius: Sagittarians don’t believe in being sorry or apologizing. For them, it is human to err and therefore saying sorry is just redundant. Interestingly, even if others make mistakes, they are pretty cool and don’t expect much from them.
Capricorn: They can’t take a simple sorry. They need reasons, explanations, written letters and the works to get elicit an ‘ok, you may go now’ phrase. They are hard to please and even harder to appease.
Aquarius: They are sweet, genuine and innovative when they think they are wrong and need to undo the damage. Aquarians are easy on their mistakes and don’t take too much time to do their sorrying.
Pisces: Pisceans don’t easily give in because they believe that everything is about perspective. So if somebody thinks they made a mistake, it’s because they have a wonky perspective. Pisceans and apologies? No chance!
With Ganesha's Grace,
The GaneshaSpeaks.com Team