Why do we ring bells in the temple? 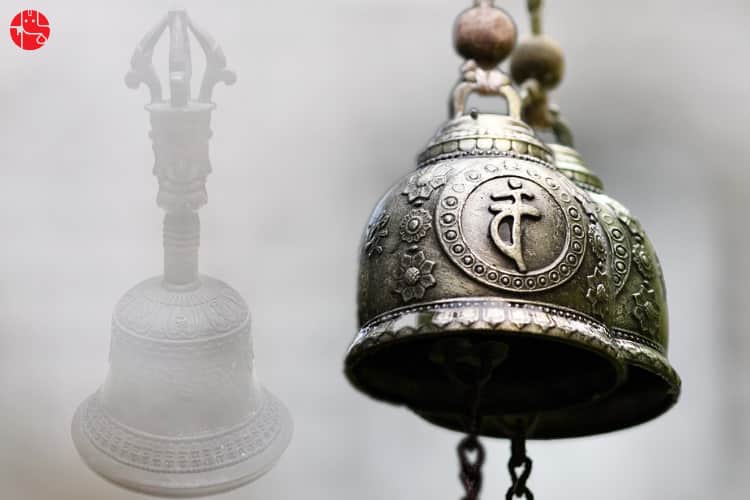 A Ritual Bell in Mandir – Ghanta

In Hinduism, every article used during any puja or ritual is said to have certain significance. This holds true to the spiritual bell used in temples and homes. This bell is known as a Ghanta. The ringing of the bell produces an auspicious sound. Hindu temples have at least one metal bell hanging at the entrance and devotees ring the bell while entering the temple, which is an essential part of Darshan.

A bell is also rung by priests during Puja, Yagna, aarti, lighting incense stick in front of the deity, while bathing the deity and while offering food or flowers. These bells are specially made to produce the long strains of the divine sound Om, which produces positivity.

Know the lucky God for you to be prayed according to your horoscope from Our Expert Astrologers and solve the current problems as well as stop the upcoming problems.

In Hinduism, bells are generally hung at the temple dome in front of the Garbhagriha. Generally, devotees ring the bell while entering into the sanctum. It is said that by ringing the bell, the devotee informs the deity of his/her arrival.

The significance of ringing the bell is mentioned in the verse of ancient scriptures of Aagma Shastra.

It means “I ring this bell indicating the invocation of divinity so that virtuous and noble forces enter; and the demonic and evil forces, from within and without, depart”.

Are you facing a delay in your marriage? Are you not satisfied with your job? Talk to an Indian Astrologer and get a quick solution to your problems.

What are the benefits of Ringing a Bell in a Mandir?

a) The sound of a bell activates the seven chakras in the human body.
b) It creates harmony between the left and the right brain.
c) The sound retains the principle of deities and drives away evil energies.
d) The sound makes the mind and soul calm and rejuvenates the human body.
e) It removes negative thoughts.
f) It brings back one’s wandering thoughts back into the present and helps to focus.
g) The sound of the bells has a profound healing power that helps one to combat the worldly chaos and get into a state of trance. It helps one to be with the Divine.
h) To unveil more such knowledge about puja articles and their significance, you can call Your Personal astrologer anytime.

Know what is Vastu and get rid of life problems with help of Vastu
Know what is Numerology and predict your future
Get Today’s Panchang – Tithi and Nakshatra
Find the list of Hindu Festival Calendar 2020
Check Compatibility With Your Partner
Zodiac Signs: All About Your Signs