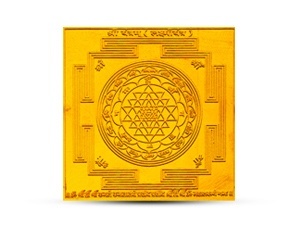 We often face challenges in life that may seem like theyâ€™re out of our control. It is hard to deal with life when one has lost hope. What if one could shield themselves from all the negativity and live in abundant joy, peace and harmony instead?

Shree Yantra
is believed to be one the most powerful Yantras of all. It is often referred to as an instrument for Wealth. It has been designed to give the maximum benefit. One can attain anything he wishes through the cosmic powers the Shree Yantra exudes.

The beauty o f the Shree Yantra is that it symbolises all Gods and Goddesses. It is said that the creator of the universe, Brahma possessed it.

Eastern philosophies assert that each shape in the Universe emits a certain energy. The Yantras make use of the shapes, known to emit good and harmoniou s energies â€“ concentrating and channelising them from the Universe.

If the Shree Yantra is att uned, energised and worshipped regularly with the proper chanting of the Mantras, it can put one in contact with the extremely elevated energies.

It is called the symbol of spirituality for a reason. It holds the nine chakras. Five chakras of the Goddess Shakti and four of the Might ly Lord Shiva. It holds devine magnetic energies. It is a Talisman that produces positive vibrations when placed and one can notice the change in no time.

One can even find the Shree Yantra sourcing back to the age-old art of Vastu Shastra.

Among the Yantras, Shree Yantra is one of the most beneficial and powerful Yantra. It can usually be used by anyone, at any stage of life.

You may also choose to get a Meruprushth Shree Yantra â€“ Shree or Go ddess Lakshmi herself is believed to have arisen from the Meru Parvata â€“ during the legendary holy Samudra Manthan. This is the reason that this variation of the Shree Yantra is a figurine made in the very form of the sacred mountain Meru. This is a very special and auspicious f orm of the Shree Yantra.

You May Also Like;
1. Significance of Worshi pping Shree Yantra
2. Worship Goddess Shakti to invite peace and happiness during Chaitra Navratri.