The Great Rani of Jhansi is a perfect embodiment of Courage and ‘Nari-Shakti’! 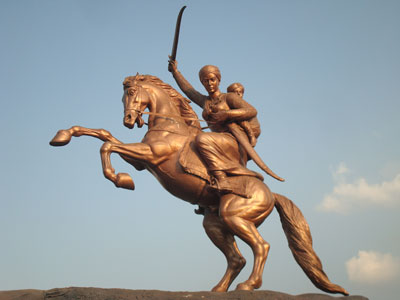 Talking of Rani Laxmibai, the first thing that comes to our mind is the wonder and power of a woman, and her unique and sublime brand of courage and fortitude! Even the thought of her legend would give goosebumps and fill our heart with pride! Rising up to the occassion like a brave lioness, she fought with courage, conviction, gut and gumption! Her unlimited valour and her legend shall always remain etched in our hearts and shall continue to be a source of infinite inspiration! We, the people of this glorious country shall forever remember that she was driven by ill-treatment into rebellion, and that she lived and died for her country. Hail the glory of the Queen! What would be the planetary portrait of such an extraordinary woman with such unbelievable fortitude? Read on and find out…

The Astrological Portrait of the Gallant Woman:

May Rani Laxmibai’s soul rest in peace and may her glory and heritage always inspire millions of people in the world to fight for their rights and to not surrender to injustice!