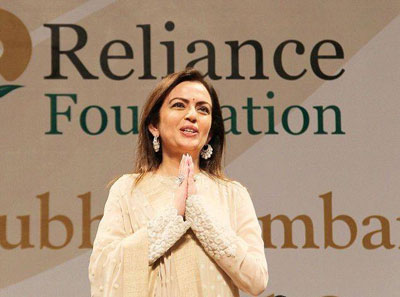 Nita Ambani – the wife of the richest man in India, Dhirubhai Ambani, is one of the most famous and vibrant businesswomen in India. From her famous charity works, philantrophic activities and her role as the owner of the popular IPL Cricket team – Mumbai Indians, to various other welfare activities, she has been there and done that! She was one of the founding members and is a chairperson  of the Dhirubhai Ambani International School. What could be the planetary combinations that confer such affluence, good fortune, power and fame on Nita Ambani? Check out the exclusive astrological analysis...
Nita Ambani
Date of Birth  :- 1st November 1963
Time of Birth  :- Not Known
Place of Birth :- Mumbai
SOLAR CHART

[Owing to the unavailability of credible birth-time of the celebrity, the analysis and predictions have been done on the basis of the Solar Chart/ Surya Kundli with the help of his birth-date and birth-place only.]
Important Astrological Highlights:
All the planetary configurations discussed above made her such a bright and famous personality in the business circles and an crucial part of the Reliance Group. There is indeed a phenomenal role that the planets play in catapulting a person to great renown and fame!
Ganesha wishes a great time ahead to Nita Ambani.
With Ganesha’s Grace,
Kashyap Rawal
The GaneshaSpeaks.com Team
Share