The New Trend Of Mangalsutra Bracelet 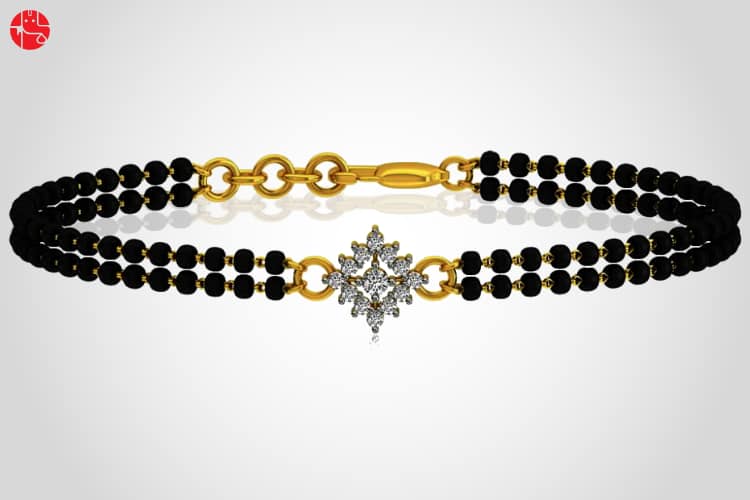 Who said a Mangalsutra has to be worn around the neck? Bracelet Mangalsutra is a new trend in jewellery fashion.

The Mangalsutra bracelet is typically a bracelet comprising of the Mangalsutra beads along with the pendant, however, the typical double loop pendant or tanmania is replaced by a contemporary pendant design, that gives it a charm bracelet kind of appeal, making it suitable for all kinds of attires, including office wear.

But did you know the significance of Mangalsutra and why do married Hindu women wear it?

Here is the answer:

What is the history behind wearing Mangalsutra | The Origin of Mangalsutra

The term Mangalsutra is a combination of two words mangal and sutra. The word mangal means auspicious, and Sutra means thread – together Mangalsutra means an auspicious thread uniting the souls.

It is believed that Mangalsutra, which is one of the essential aspects of the Hindu tradition, originated in South India and was adopted by the Northern states. In South India, the name and style of a Mangalsutra change depending on the community and caste. It is usually called a Thaali or Thirumangalyam, and it has a long yellow thread and a gold pendant representing the Goddess Supreme.

Though the concept was formed in South India, it migrated to other parts of the country and evolved accordingly. Wherever you go in India, you will find different types of Mangalsutra and variations of the same theme.

What is the Significance of Mangalsutra?

In Hindu traditions and culture, a woman has to wear five signs of marital status – the Mangalsutra, toe rings, Kumkum, bangles and a nose ring. Of these five, Mangalsutra is the most important.

The Hindu culture also believes that a woman who is wearing a Mangalsutra, should never part with it until her husband’s death. And if the thread of the Mangalsutra breaks for some reason, it is considered to be a bad omen.

A Mangalsutra is not just a piece of jewellery or a fashion accessory; it is a symbol of eternal love, respect, and trust that a husband and wife share.

Want to know how your marriage life will be. Click on Married life report.

The scientific reason for wearing Mangalsutra

Apart from the health benefits, it is also believed that a Mangalsutra having mustard-sized black beads in it wards off the evil while upholding the sanctity of the marriage.

Mangalsutra stimulates the Surya-Nadi or the Sun-channel in the woman body and awakens the inherent energy in it. Gold used in making Mangalsutras is a good source of positive energy and helps capture and restore good energy in a woman’s body.

Is Mangalsutra bracelet suitable according to astrology?

1. Mangalsutra should be purchased on Thursday or Friday or on dates 3, 12, 21, 31, 6, 15 and 24 of any month. It will protect the couple from evil-eye.
2. If a woman wears Mangalsutra according to her zodiac sign, it can be auspicious in terms of loyalty, commitment and love between husband and wife.

Ask our astrologer to get more tips on Zodiac Sign Mangalsutra.

From the mandatory and traditional ornament that the Mangalsutra used to be, it has now become more of a proud fashion statement. The latest styles in Mangalsutra also include Zodiac sign Mangalsutra bracelet.

So, flaunt the tradition and grab attention wearing the new in-style Mangalsutra bracelet. A stunning way to let the world know you are happy and fashionably married.