‘Lalit Modi is a victim of Rahu-Ketu transit’

A lot has been written about the drama and excitement generated around IPL-III, both on and off the field. While the Sachins, Dhonis and Pollards were setting the stadium on fire with their exploits on the field, the likes of Lalit Modi, the beleaguered chairman and commissioner of IPL aka ‘Mr. Fall Guy’, Sharad Pawar, the president of BCCI aka ‘Mr. Negotiator’, the BCCI top brass aka ‘the Invincibles’, and our ‘honourable’ politicians were exchanging fire outside it.

But despite the conclusion of the third season of IPL with unprecedented celebrations and fireworks in Mumbai and later in Chennai, there is no dousing the controversy that surrounds the suspended Chairman of IPL. Looking at the current string of events and mood at the menacing corridors of BCCI, the future of the man, who has been credited for single-handedly writing the IPL success story, looks bleak.

However, Ganesha, armed with the wisdom of the Vedic Astrology System, has not entirely written Modi off just yet. He believes that the current problems faced by Modi are primarily due to the ongoing Rahu-Ketu transit. And his troubles are likely to become less intensive as soon as the effect of the two malefic planets wears out. Here is what Ganesha and the Vedic astrology system have to say about Lalit Modi’s fate. 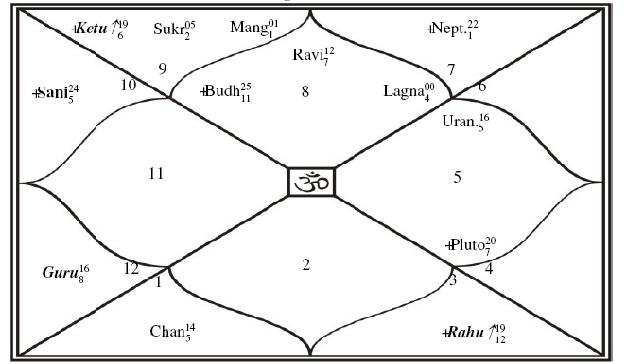 Saturn, which is placed in its own sign, is in the 10th  House from the natal Moon. The 10th House is the house of career. And this arrangement forms Sash Yoga.

Jupiter is also placed in its own sign. The strong presence of Jupiter and Saturn in his birth chart has made him one of the most effective sports administrators in the history of world cricket. But while the transits of Saturn and Jupiter has helped him prosper, there are other transits that have led to his current downfall.

At present, he is under heavy influence of Rahu-Ketu transit. This is a very difficult phase for him with Rahu conjunct with natal Venus and Ketu’s presence in the 8th house from the Sun.

Since Venus is the planet of glory, love, values, urges, social image, creation, attraction, luck, personality and money, the malefic effect of Rahu on Venus has led to unwanted revelations that tarnished his public image. The transiting Ketu is passing through the 8th house from the Sun, the planet of power and authority. Due to this, Modi’s position as the chairman and commissioner of IPL has been compromised and he was suspended.

Ganesha feels that he will continue to face enormous difficulties till August this year. And till July 27, his problems will look menacingly insurmountable. However, things will start looking a little less murky from August onwards and the malefic effects of Rahu-Ketu will significantly tone down by the end of August. The positive effects of Jupiter transit from September onwards is likely to bring about a remarkable improvement in his condition. But neither his fighting spirit nor Jupiter’s favourable position will help fully reinstate what he has already lost and is about to lose.