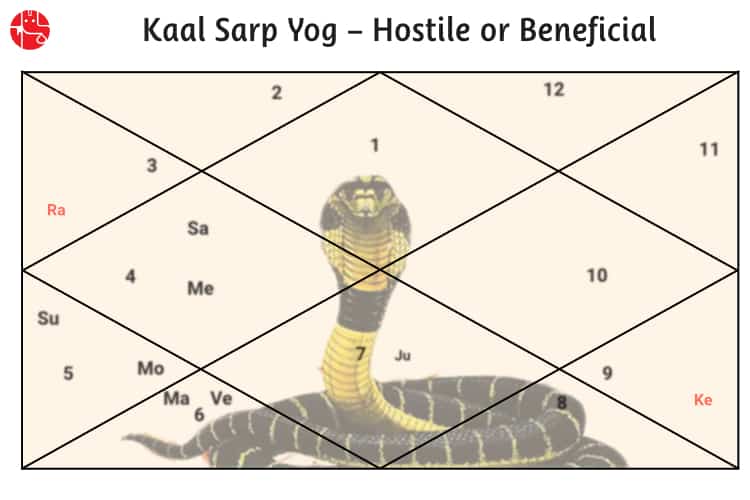 Planetary positions have always resulted in certain influence on individuals. Vedic Astrology has gifted us a unique and special aspect of Yoga which plays a significant role in a person’s life. These Yogas are recognized by the positions of planets in various houses and their special combinations with other planets.

In a native’s birth chart, Rahu and Ketu are always placed seven houses away from each other. When all the planets fall within these seven houses and the rest of the five houses remain vacant, it forms Kaal Sarp Dosha. This is regarded as inauspicious in Vedic astrology. While analyzing the birth chart in your Janampatri, it is essential to see if a planet actually falls within the seven houses ranging from Rahu to Ketu. This Dosha causes a lot of struggle in life in all aspects including marriage, career, finance, health, and children.

Based on the position of Rahu and Ketu, 12 types of Kaal sarp dosha are known. They are:

Kaal Sarp Dosha is a frightful astrological event that affects a person severely with multifaceted catastrophes. It is a result of bad karma done by the native in the previous lives. Kaal Sarp Dosh's effects can be managed and are of the short span when Rahu sits in the third, sixth or 11th house of the birth chart. It is severe and long-lasting when Rahu occupies the fifth, eighth, & 12th house.

Some of the terrifying effects of Kaal Sarp Dosh include:

Kaal Sarp Dosh invites difficulties throughout life. It also hinders the positive effects of other planets in the native’s horoscope.

To negate the ill effects of Kaal Sarp Dosh, one should chant Maha Mrityunjaya Mantra. Kaal Sarp Yoga comprises of a set of observances, codes of conduct and rituals, so the affected native should:

Kaal is synonymous with death. One who has the Kaal Sarp Yoga in their Kundli face near-death experiences many times in life. While there are both negative and positive effects on an individual's life, this dosha brings in some unease. The positive effects of Kaal Sarp Yoga are that it makes one diligent and religious towards the work. It also makes one courageous and honest.

To Get Your Personalized Solutions, Talk To An Astrologer Now!
With Ganesha's Grace,
The GaneshaSpeaks.com Team