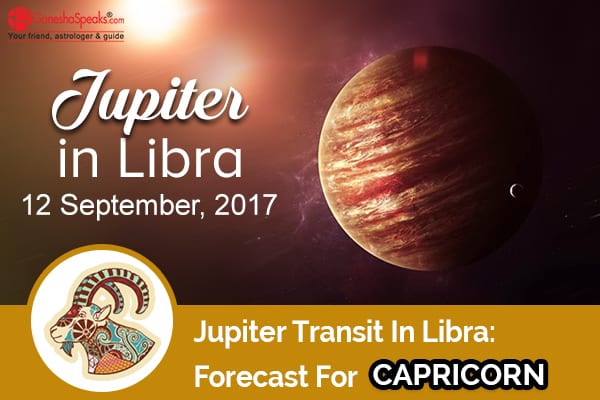 Jupiter's entry into the Libra sign on September 12, 2017, is going to bring in increased public recognition and professional success for the natives of Capricorn sign. Your personality, skills and talents have been seldom recognised so much so far. You are likely to begin getting the benefits of the hard work which you have done in the past. Do you want to know how this transit may impact your finances? Avail the exclusive Jupiter Transit Report For Finance now!

Significance of the transit of Jupiter in Libra 2017 for Capricorn:

Jupiter in Libra: You may turn an achiever in life

This time will be marked with significant developments like advancement in career, success in business, achievements in other areas and so on. During this Jupiter transit in Libra 2017, you are likely to undertake business related travel. You are also likely to reach a wider audience. Your public status will change for the better. There is a likelihood of promotion in job, new job opportunities, an important award or even a marriage or union during this Jupiter transit in Libra 2017. Stars foretell good time for your profession. However, if you want to capitalise on it further, buy the Jupiter Transit Report For Career. You will see positive differences in your career.
You will get more ambitious which would also be triggered by developments in career, business and so on. You are likely to be in the limelight during this phase. You may see significant progress in the outer world, a rise in status and increased recognition during this Jupiter transit in Libra 2017.

Jupiter transit in Libra: You will balance optimism and realism

There may be some new developments in your career during this Jupiter transit in Libra 2017. Your career may acquire teaching and guide aspects now. Some of you may be working on some project behind the scenes, which would be ready to be shared now. This duration of Jupiter transiting Libra 2017 is also marked by a healthy balance between optimism and practicality.
You will find yourself in a position that suits you during this Jupiter transit in Libra 2017. You will take pride in the work you do. You are likely to gain in prestige and social standing. You can even be more charismatic in your position of authority and responsibility. You may come closer to achieving a cherished goal.  You will develop more faith in yourself. We need many things to make our business surge. The most important among them is the planetary support. Will your business surge during this Jupiter transit? Find it out with the Jupiter Transit Report For Business.

Jupiter in Libra: Watch out for misunderstandings