Ganesha says it is going to be another damp squib doomsday alert
During the past few days, the world of astronomy has been abuzz about the prospects of the world coming to an end on August 26th 2032 due to an asteroid impact. The reason is the discovery of the asteroid 2013 TV135 on October 12th 2013 by a Ukrainian astronomer Gennady Borisov. The asteroid 2013 TV135 passed earth on September 16th 2013 at a distance of 6.7 million kilometers, that is more that 17 times the distance from Earth to the Moon, as per astronomer Stuart Clark. However, anything that passes within 7.5 million kilometers from the Earth is automatically dubbed as ‘potentially hazardous’ by the International Astronomical Union. To put things in perspective, if the asteroid 2013 TV135 managed to hit the earth, the impact would be 50 times greater than the largest nuclear bomb ever detonated. As per the calculation of the astronomers, the asteroid 2013 TV135 will again zoom past the Earth in August 2032 and uncertainties in its orbit imply that it has a 1-in-63,000 chance of colliding with the Earth. According to NASA, that released a statement named ‘reality check’ regarding 2013 TV135 points out that this asteroid is just one of the 10,332 near earth objects that have been discovered so far. In addition, NASA stated that the probability of of no impact in 2032 is about 99.998 percent. To put at rest to the speculation of the world ending on August 26th 2032, Ganesha analyses the planetary positions on the said date and also uses the ‘Thema Mundi’ chart (world theme) and confirms the conclusions drawn by NASA. Read on to get an in-depth astrological analysis of this event.

Ganesha observes that we don’t have any reference horoscope regarding ‘how world ended in the past’, so obviously there cannot be any specific rules to study this situation. This article is just an analogy and an attempt to analyze the event with the help of astrological principles. In such a scenario with no reference Horoscopes available, Thema Mundi chart (World Theme) helps to analyse the event in a systematic manner. 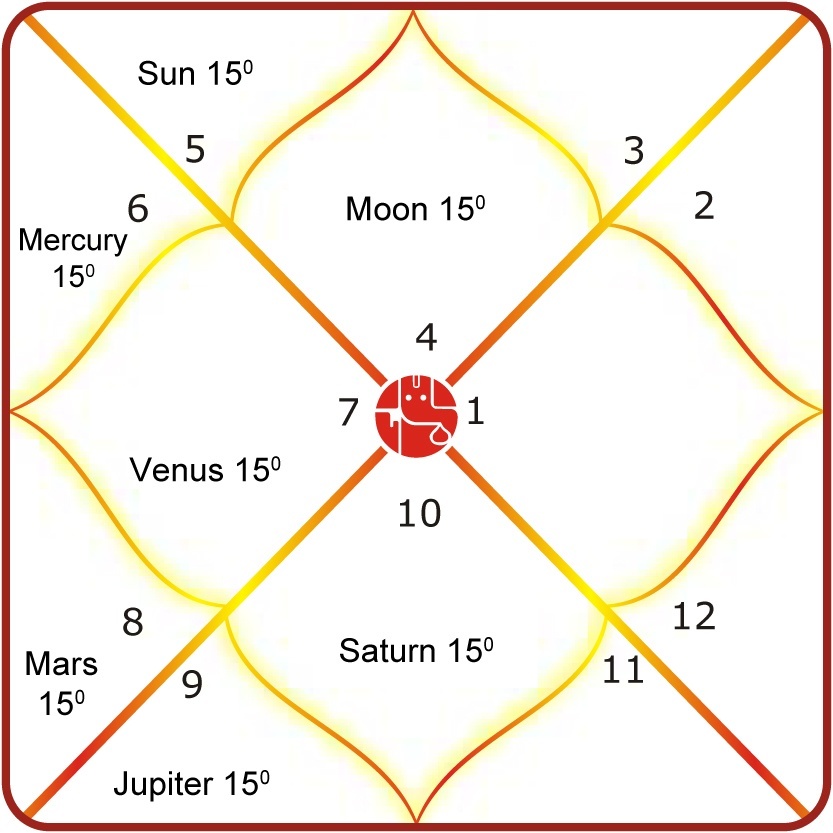 In Thema Mundi, all planets are at 15 degree in the respective Signs as shown in the chart above. The same chart has been followed since Hellenistic astrology time and various articles have been written based on the same, but as events/catastrophes happen country by country, the Thema Mundi chart never comes into the picture (because every nation has its own unique national horoscope based on which, events related to the nation are predicted). However, in this case, because the event is concerning the entire world, the only option left is to study the planetary alignments with the help of ‘Thema Mundi’ chart.

Neptune will be at 17 degree in Aries, forming opposition with Thema Mundi’s Venus. Neptune, the ‘God of the Sea’, often indicates tendency to day-dream and it also rules the attributes of illusion and hallucinations. If the transit chart is set at 15 degree (same as Thema Mundi’s Ascending degree), we observe that Neptune is the only planet that forms closest aspect with the angles. All other planets are off some degrees.

Consequently, in the first place, there may be a sense of fright in the people, because Neptune forms a 2 degree orb opposition with the 4th House that indicates citizens (in this case, people living in this world). In a Mundane astrology horoscope, 10th House indicates the ruler, so national rulers may also be frightened on that day – because of the likelihood of the event to take place. However, the asteroid seems to be bit off the mark and might not affect Earth, feels Ganesha.

Ganesha also observes that transiting Mars will be in about 4 degree proximity on the day of the event i.e. 26th August 2032. So that means, it will be affecting Thema Mundi’s Sun. Whenever we do not have any other planet becoming Hyleg in the chart (Hyleg means giver of life), we take Sun as the standard Hyleg. Here we observe that Mars’ aspect is separating with Sun and it is not applying. Pluto, on the other hand, posited in Aquarius is at 13 degree, forming opposition with Sun. This is applying an aspect, but it will reach 15 degree only in February 2033. So, the date on which we presume the asteroid 2013 TV135 to hit the earth is not going to create any disaster. All other planets on that day are far behind or ahead of 15 degree.

In short, Ganesha confirms the observation of NASA that the asteroid 2013 TV135 hitting the Earth on 26th August 2032 has practically no chance. Hence, there may not be any major disaster and life on Earth will continue as before.