The Women in Hindu Mythology Inspiring Us Even Today 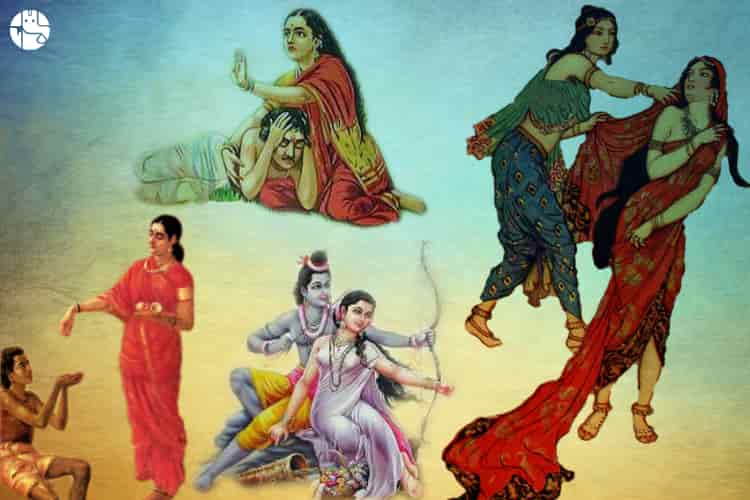 We all grew up listening to mythological tales about Hinduism and its magnificent characters. Some of them were larger than life and left us overwhelmed with their incredible way of life. It becomes difficult to believe that such powerful characters ever existed on earth. However, they sure did as per Indian Mythology.

When talking about our culture, one always remember the strong women in mythology. These women were not only part of our mythological stories but also played a vital role in establishing a righteous world. They are the example of determined, brave and graceful beauty with brains.

This blog highlights some of the remarkable and inspiring female figures in Hindu Mythology who proved that indeed a woman is the ultimate form of Maa Shakti.

Arundhati is the wife of great Sage Vashishth. Arundhati was an intelligent Brahmin girl who loved to learn about Vedas. She was a master of many skills and was no lesser than her husband’s wisdom or knowledge. She loved her husband so much and their bond was so pure and powerful. When they were away from each other, all they asked from God was the safety and welfare of each other.

As a result, Lord Shiva stayed at Rishi’s ashram becoming Arundati’s student for almost a year to keep her safe in the absence of Rishi Vashishth. Fascinated by their love, Lord Shiva gave Arundhati an equal spot as his husband in the sky as a celestial body. Even today, they are seen together in the sky in the form of stars. Arundhati is undoubtedly among the inspiring women in Hindu Mythology.

Almost every Indian might have heard of epic Ramayana. Sita the main female character of this epic mythology is said to be the most beautiful woman ever on earth. She was not born nor created. But she was a self-manifested form of Goddess Lakshmi in Treta yug who was found in the womb of the earth by King Janak of Mithila Kingdom. Later in life, she marries the divine consort Lord Vishnu in Ram Avatar.

She was known for her dynamic character. She had great strength and always stood for her self-respect. Even during the difficult times in her life, she always made the right choices to balance her grace and duties complimenting perfectly to each other. Lastly, she submerged back in Mother Earth ending her life. She was an ideal woman in the history of India.

In the epic Ramayana, one more female character is worth knowing. We are talking about Mandodari, the wife of the demon king Ravana. She was a great wife as she loved her husband and respected him despite his evil deeds. It is said that she was extremely beautiful and generous.

Loving a good man is easy but loving an evil man is not that easy. Mandodari was aware of the wrong deeds of her husband and always did her best to make him understand his faults and adopt good path. She practiced every ritual of a righteous wife throughout her life. Her chastity was one of the reasons that made Ravana was so powerful and strong.

If you ever heard the story of Mahabharata, you will realize that the epic battle occurred because of a woman. Draupadi, the wife of five Pandavas is known for her chastity and feminism. She was born as an adult from fire sacrifice. She was one of the most beautiful women of the era and had great morals.

She was intelligent, courageous, loyal, generous, and the one who stood firm to protect her womanhood during the game of Chopad. As per Indian scriptures, Draupadi is the first feminist among the Indian inspirational women in history.

Almost everybody has heard the story of Savitri and Satyavan. Savitri brought back the life of her husband from God Yama. Savitri was born as a blessing to her parents and held a special charm and intelligence from childhood. She was married to a wise man Satyavan who loved her deeply. Rishi Narad predicted that Satyavan would die in a year. Savitri knowing the prediction started fasting and accompanied her husband everywhere to save him from the unfortunate happening.

However, one-day, Satyavan felt sick losing his life. Savitri followed Yama everywhere when she saw him taking the soul of her husband. Yama was impressed by her devotion and dedication, and granted her a boon of anything other than the life of her husband. Savitri was very intelligent and had a great speaking ability. Thus, she asked a boon in such a way that Yama had to give her the life of Satyavan to make his boon true. The firmness of Savitri defied God Yama.

These five famous women within Hinduism are an exceptional example of strength, wisdom, chastity, and compassion. They believed in themselves and made the world believe in them too. They are the inspiration for all the women in the current era. Each of these women is great in every sense and there is so much to learn from their stories.

Hope you enjoyed the read! Do share your opinion with us, as we would love to hear your thoughts.