Challenges may continue for the Indian Navy for the next 1.5 years, says Ganesha.

The unexpected resignation of Chief of Naval Staff Admiral DK Joshi this week, taking moral responsibility for the spate of recent naval accidents, has set the cat among pigeons. While it has won the Naval chief kudos for his uprightness, it has caused the central government, particularly the defense ministry, a lot of embarrassment, and exposed the lack of modernisation and the immense pressure under which the Naval forces have been functioning since the 26/11 terrorist attacks on Mumbai. In the name of Naval preparedness (both for the purposes of maritime security and for anti-piracy operations), the forces have been over-stretched and hardly get a break to relax and recuperate. Many political pundits are of the opinion that the government is equally to blame for the accidents, for not only mismanaging Naval resources but also for not procuring cutting-edge equipment – and that Joshi has only become a scape-goat in the whole sordid affair.Keeping the current uncertainty in view, Ganesha, with the help of Vedic astrology, takes a look at the future of the Indian Navy, basis the Horoscope created for the Indian Navy for the date 26th January 1950, the Indian Republic Day. On this day, the name Indian Navy had been adopted, and all the vessels were also redesignated as Indian Naval Ships (INS). 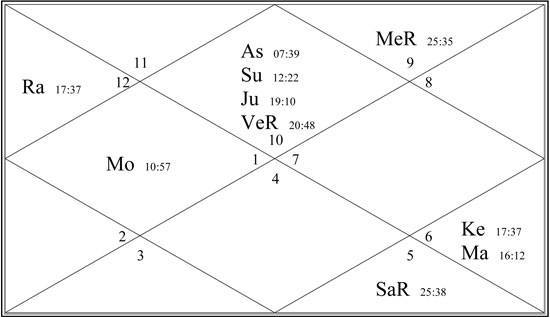 AstroSpeak – the star gazing
As per the Surya Kundli or the Solar Horoscope of the Indian Navy, Sun-Jupiter are posited in the First House, along with a retrograde Venus. Additionally, Ketu-Mars are in conjunction in the Zodiac Sign Virgo in this Kundli, and also Venus is retrograde along with Saturn-Mercury. Overall speaking, the problem in this Horoscope is mainly due to the transiting planets.

What next!
If we look at the current planetary positions, it is noteworthy that Mars-Saturn-Rahu are transiting. In Indian Navy’s Surya Kundli (Solar Chart), this transit is taking place in the 10th House over the Natal Moon – and it’s an aspect which weakens the overall Kundli to quite an extent. Plus, Jupiter is not very supportive currently. This planetary support, all in all, is currently very low, and can be held responsible for the recent unfortunate incidents.

However, Ganesha does see some hope, and feels that the situation may come under control, sooner or later – even though it may take its own sweet time. From 17/07/2014, Rahu shall transit through the Zodiac Sign Virgo – where Ketu-Mars are already posited natally in the Indian Navy’s Horoscope. The effects of this transit shall remain for upcoming 1.5 years, and thus the time may be overall challenging. The only planetary support that is visible in the coming times, thus, will be from Jupiter – and that too post June 2014 – when Jupiter shall transit over the Natal Sun-Jupiter-Venus. Still, it is noteworthy that the challenging times for the Indian Navy are yet to continue, and this should be taken quite seriously, says Ganesha.