Know How Hinduism, Jainism And Buddhism Compare With Each Other 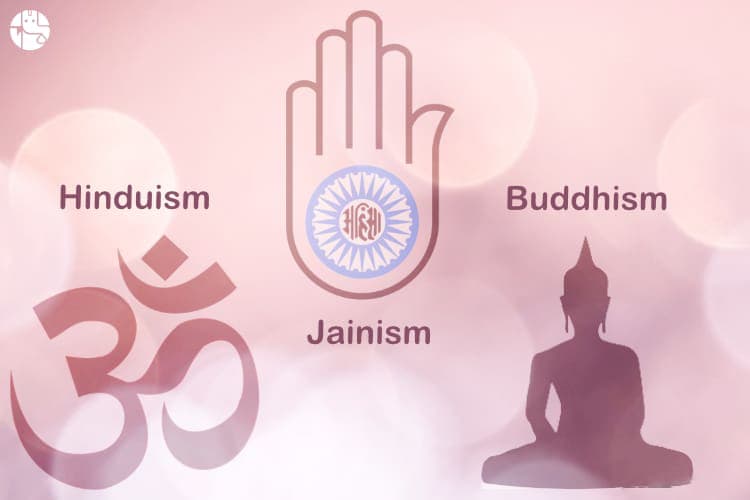 India is sometimes referred to as a spiritual superpower. It is also called the spiritual heart of the world. It is so-called because some of the most profound religions have taken birth and have grown & nurtured here. The spiritual-intellectual developments in India have energized & enthused humankind just like the heart oxidises the blood in the entire body.

Indeed, India is the birthplace of four important religions namely Hinduism, Jainism, Buddhism and Sikhism. While the first three religions trace their origin to ancient times, Sikhism was born in medieval India, during the Mughal era as per the origin of religion. The three ancient religions of India have inspired many and ignited countless people across the world. The universal approach and the non-sectarian philosophy & teachings of Hinduism, Jainism and Buddhism have influenced nationalities and impacted large sections of humankind. While the three religions largely see each other as sister concerns and they have usually not clashed with each other (at least not violently), their individual destiny and developments have been different.

Let us see in brief what are the similarities and differences between the three religions:

Similarities Between Hinduism, Jainism And Buddhism

The three religions have emerged out from the same source, which is called the Aryan Truths. So, all the three believe in the karma theory, cycle of birth & rebirth and a final destination of infinite peace and happiness which is the goal of every individual (known variably as Moksh, Nirvana, Kaivalya). Thus, the fundamentals of the three religions are the same, they stress on the practice of Truth (Satya), Non-Violence (Ahimsa), Chastity (or Celibacy in case of monks and nuns (Brahmacharya)), Non-Attachment to worldly possessions (Aparigraha) and Non-Covetousness (Asteya). However, they do differ on some prominent philosophical and doctrinal subjects as in the Indian culture. Their views and opinions on different topics are enumerated as under:

Differences Between The Three Religions:

Most sects and sections of Hindus believe that the universe was created by a Universal God. At the same time, Hinduism allows the supreme creator to be worshipped in various expressions and manifestations. Thus, we have so many Hindu Gods like Vishnu, Shiva, Ram, Krishna, Hanuman, Ganesha, and so on. Jainism denies that the universe was created by any deity. In fact, according to Jainism, the universe is eternal and was never created. On the other hand, Buddha was silent on God. As per Buddhism (especially early Buddhism, known as Theravada Buddhism), thinking about God is futile towards the practice of spirituality and liberation from the Karma bondage. Know more about Astrology and Religion.

The Nature Of Soul

Most of the Hindus believe in a soul. According to mainstream Hinduism, as per the play of Maya, the soul has been separated from the Supreme Soul (Parmatma) and the ultimate purpose of the soul is to merge back into the Supreme Soul, which is called Moksha. As for Jainism, they believe that every soul is itself potentially a Supreme Soul. Thus, the purpose of human life is to divest the bad karma from the soul so that it becomes the Supreme Soul, a stage which is referred to as Moksha or Kaivalya. Well, Buddhism is the sole significant religion not just in India but across the world, which denies the existence of the soul. As per Buddhism, it is our desires which are born again and again. By eliminating this entanglement of desires, we can reach the final stage called Nirvana also called nothingness.

The Emphasis On Vegetarianism

Religious Hindus (those who are attached to some Hindu religious organisation) in India and the world are predominantly vegetarian. Hinduism glorifies vegetarianism and there are numerous Hindus in India and the world, who are pure vegetarians. In fact, the largest section of vegetarians in the world comes from Hindu vegetarians. As for Jainism, it is the only religion in the world which is uncompromising, unambiguous and unfailing in its support to a meatless and eggless diet. It is said that consuming meat or egg is unbecoming a Jain. On the other hand, Therevada Buddhism allows its monks and nuns to accept meat in their bowl if the animal was not specifically slaughtered for them. Mahayana Buddhism is more for vegetarianism and most of its schools forbid the monks and nuns from consuming meat at all. In practice, the lay followers of Buddhism (not the monks and nuns) are predominantly meat-eaters in most parts of the world.

The Intensity Of Spiritual Life

Hinduism is considered more balanced in its approach towards spirituality. As per Hinduism, there are four pursuits of life namely Dharma (Righteousness), Artha (Money), Kama (Desires) and Moksha (Salvation). Thus, the ancient Hinduism had ordained four stages of life namely Brahmacharya Ashram (student life), Grihastha Ashram (householders life), Vanaprastha Ashram (the stage of seeking the truth) and Sanyasa Ashram (the stage of propagating the truth). Thus, spirituality has to be pursued only in the latter two stages of life (from 51 years to 100 years). On the other hand, Buddhism and Jainism are unambiguously committed to spiritual life. Attaining liberation is the chief and the overriding pursuit of life in these two religions.

The Geographic Spread Of The Three Religions

Hinduism has remained largely confined to the Indian (or South Asian) subcontinent. For a long time, Hinduism did not believe in conversion, meaning one was either born a Hindu or he/she can not become a Hindu. However, in recent developments, Hindu organisations have started carrying out conversions. It should be noted that Hinduism was not against conversion, rather it did not have any concept like conversion. As for Jainism, it is limited to some pockets of India (It is stronger in the states of Western and Central India like Rajasthan, Gujarat, Madhya Pradesh, Maharashtra). Jainism is an ethnic religion in the sense that its followers are almost absolutely people of the Indian origin. In sharp contrast, Buddhism has spread to large areas of East & South-East Asia, which happened largely by the efforts of Indian kings who patronised Buddhism like the great Ashoka.

To solve your life’s problems, talk to Your personal astrologer.