Harry Potter Astrology- Horoscope Of The Boy Who Lived 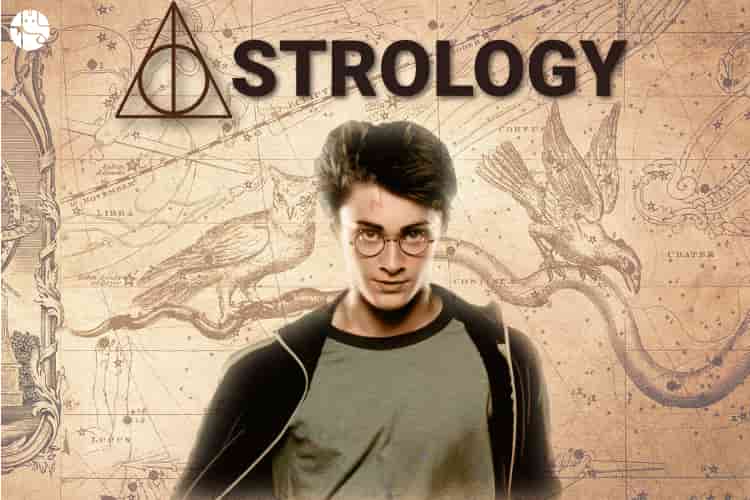 Years and years after the release of the last book, people are still talking about the Harry Potter phenomenon. There are several fan theories and conspiracy theories surrounding our childhood super-hero. One of the most appealing ones to us was the fact that JK Rowling used astrology to map out Harry’s journey. Intrigued, we had an astrologer prepare a birth-chart and a horoscope report.

Let’s dive into a little Harry Potter Astrology, and take a look at what the chart has to say. Get your very own birth-chart right here.

Note: Since Godric’s Hollow is a fictional place, we’ve used London as a timezone reference

Scorpio rising reveals one of the most challenging and significant tests. It is the sign through which an individual must pass to come into those transformative crises which turn desire into love and personal will into the Will-to-Good of the Soul. The mental and physical body is tested with regards to (1) pride, (2) separateness, and (3) cruelty.

So, according to Harry Potter’s birth chart, he must go through several tests to rise to the top and do good for others. No one in the wizarding world went through the struggles that Harry Potter did. Right from the start, we see Harry being pushed into situations wherein he must pass a test to destroy evil. For instance, in The Philosopher’s Stone, Harry comes face to face with his deepest desire. His guru Albus Dumbledore warns him against the negative consequences of such wants. Later, when Harry comes face to face with his greatest enemy, Voldemort, he is given a chance to make all his wishes come true. Yet, he chooses the goodwill of the others and rises through the desire to (temporarily) destroy Voldemort. Harry and his friends go through a series of tests to reach the philosopher’s stone.

Harry has every reason on earth to be the most egotistical man. However, we never see Harry affected by extreme pride. Yes, we do see glimpses of pride here and there, but none of it lasted long enough to make him arrogant. He always chose love and friendship over everything else. Even in the end, when he finally manages to kill Voldemort, all he wants to do is be with his best friends, instead of being the centre of attention.

Isolation is one of the greatest tests that Scorpio ascendant puts one through. Harry Potter tends to hide his pain and emotions. He would have willfully stayed alone throughout his life had it not been for Ron and Hermione. In The Order of Phoenix, Harry Potter can feel the connection between him and Voldemort getting stronger. The only person he ever informed about the negativity he feels within him was Sirius Black, his godfather. But we do see him conquer this isolated aspect of him when he finally lets his love for the people around him take control over him. In doing so, he successfully manages to keep Voldemort from taking control of his mind and body. Love and friendship conquer again. Throughout the series, JK Rowling has craftily placed many-a-scenarios where Harry Potter must turn to his friends to get him through the tough times.

It would be an understatement to say that Harry Potter faced a lot of cruelty in life. Almost every dark character in the series was hell-bent on destroying his life- Snape, Voldemort, Draco, Umbridge, Dursleys, etc. However, in the end, he somehow has the strength to face all of this and still be a hero- a good one. He even manages to feel bad for his mortal enemy- Voldemort.

Due to this deadly combination, Harry Potter lost his father after his birth.

This is the diffused light of substance itself, the “dark light” of matter. It is the light awaiting the stimulation coming from the Soul light. In The Deathly Hallows, we find Harry struggling with his identity as a Horcrux. One of his most prominent tests was to destroy the dark light within him. He could have easily given up and fled, leaving the entire wizarding world at Lord Voldemort’s mercy. But he chose to listen to his soul. His soul called for a better solution. Once stimulated by his soul light, Harry could walk into the forbidden forest without any second thoughts and sacrifice himself. And the minute he sacrificed himself, he managed to get rid of the darkness within.

This conjunction in Harry Potter’s horoscope also causes power struggles with others or within oneself – psychologically, emotionally, and even physically. For most of his life, Harry was in constant conflict with himself and with the people around him. During his time at the Dursley’s, we find Harry subjected to relentless bullying. When at Hogwarts, Harry had to face many other emotionally challenging situations, including the death of people close to him. He was continually grappling to keep his emotions in check. His major power struggle throughout, however, was when he had to face Voldemort outside and within himself. Harry, after all, was a vessel that contained a part of Voldemort’s soul. This particular theme of power is constant throughout the series, and Harry continuously did struggle to come to terms with his unique abilities that put him on a pedestal higher than everyone else.

The said conjunction in Harry Potter’s birth-chart also results in exposing hidden motives in oneself and others. In The Deathly Hallows, post-Dumbledore’s death, a vast array of facts come in front of Harry that makes him question Dumbledore’s intentions. As per Snape’s memories, Dumbledore’s hidden motive all along was to prepare Harry Potter to sacrifice himself to save humanity. Snape’s memories also showed Harry how much he (Snape) loved his mother, Lily. A wave of shock hit Harry when he came to know that Snape was fighting to save Harry’s life all along, contrary to what Harry and his friends believed.

Moon in Pisces in Fifth house

This placement in Harry Potter’s astrology chart helps him to penetrate the most forlorn dimension of human experiences with the presence of self and capacity of heart that returns everything to the being; to lift the world to its Self with the healing power of love and the beauty of the saving force. Pisces is a house full of love and selflessness and altruism. For Harry Potter, nothing in this world mattered more than love- the love of his parents, his godfather, his friends, his teachers, and his girlfriend, Ginny. The amount of love that Harry can feel was so pure and so potent that even Voldemort was unable to take control of him. His love was strong enough to cast a protection spell on the entire wizarding world i.e., all the people he cared about. He was, in a true sense, a saviour of the world.

This placement helps him to transmute the light of intelligence, active in analysing facts and processes of nature or sorting out substrata of experience, into the light of wisdom. Harry’s wonderful ability to figure out information (like that of Draco being a death-eater) and using this information to do good is all due to this planetary placement. He is wise, in a non-bookish kind of way. There is a reason why he is the best at Defence Against the Dark Arts. He values practical, experience-based knowledge. Want to know more about your life? Talk To An Astrologer Now.

This placement helps him to realise and exert wisely the power of human actions and decisions to build his own world. For Harry Potter, his entire journey has been about ending Voldemort. But, without the help of his friends, and the multitude of other people, he would not have been successful at it. Without Lily’s sacrifice, Harry would have never survived the first killing curse by Voldemort. If Dumbledore hadn’t told him about the Horcruxes, he would’ve been helpless in killing Voldemort. Without Voldemort’s soul within him, he would have died at the hands of the Dark Lord in the Forbidden Forest. Without Dumbledore’s master plan, he would not have been the owner of the Elder wand, helping him eventually kill Voldemort. Therefore, everything in Harry’s life was circumstantial. He had to understand the decisions of everyone around him and use it to his advantage.

These are just some of our major observations. And looking at the information, we are sure that JK Rowling did use a lot of astrology to write Harry Potter’s life. What do you think?