Magic, Mystery, Illusion and Tricks – Houdini is a perfect example of the ‘Rahu Personality’! 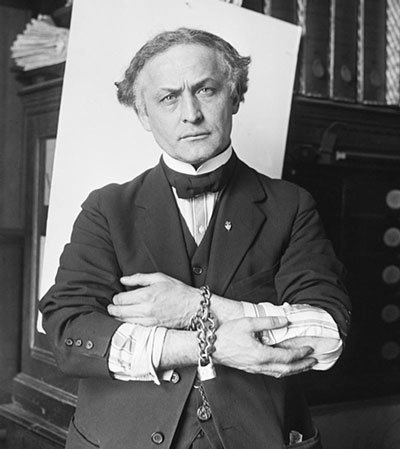 Harry Houdini is considered to be one of the best magicians and illusionists of all-time. He was a Hungarian-American illusionist, stunt-performer, escapologist, actor, historian, film-producer and pilot! Most famous for his daring escapes and mind-blowing tricks, he makes for one of the most interesting and intriguing personalities, especially in the field of magic and mystery! He won the awe and amazement of thousands of people all over the world and he achieved phenomenal popularity and prominence for his famous tricks like challenging the police to keep him locked in handcuffs, straitjackets under water, having to escape from and hold his breath inside a milk can. There a lot of things, which cannot be entirely summed up in words and this man’s brilliance makes people believe that a man can do anything, and that nothing is impossible in this world! Ganesha analyses the Magic heavyweight’s Natal Chart in detail and explains what astrological factors bestowed such skills and talents on him! Read on…