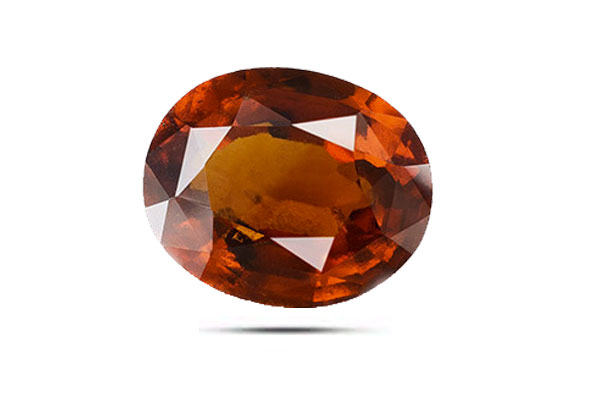 Name – The name “Garnet” has been derived from the Latin word granatus (meaning “grain”), also possibly a reference to the word malum granatum (“pomegranate”), a fruit with red seeds similar in shape, size, and colour to some garnet crystals.

Formation – Six common varieties of garnet have been recognised, basis their chemical composition. They are pyrope, almandine or carbuncle, spessartite, grossularite (varieties of which are hessonites or cinnamon-stone and tsavorite), uvarovite and andradite.

Garnet occurs most often in granite pegmatite and allied rock types and in certain low grade metamorphic phyllites. It is found both in deep-seated igneous rocks like syenite as well as serpentines, schists, and crystalline limestone. It is also found in contact metamorphosed limestones with vesuvianite, diopside, wollastonite and wernerite. Garnet may also be found in the form of small crystals associated with chromite in peridotite, serpentinite and kimberlites.

Available colours – Garnet comes in a virtual rainbow of colours, including pink, red, purple, orange, yellow, violet, green, colourless, occasionally black, brown and many shades of red and green. The most commonly found and used colour of garnet is reddish brown.

Legends and folklore place garnet among the most ancient of the talismans. Not only was it prized as an ornamental jewel, but also for its strong curative powers and protective energies. The stone is known to help one harness the available creative energies. Traditional folklore also mentions a strong link between the red garnet crystal and blood. It is believed that a garnet tones the spleen, promotes health by strengthening the circulatory system and enhancing hemoglobin production. It is also known to stimulate the metabolism, treat spinal and cellular disorders, purify and re-energize the blood, heart and lungs, and regenerate DNA.

As per the Western Astrology, Garnet if the birthstone for people born in the month of January.

As per the Vedic Astrology, Garnet is to be worn only after checking whether one’s Personal Horoscope and the planets’ placement therein agrees with the stone’s properties or not. This is because Garnet is also considered as a substitute/ alternative gemstone for Hessonite (Gomed) that is known to influence the shadow planet Rahu (the North Node), in one’s Natal Chart – as per the Vedic Astrology. Thus, if any of these gemstones suit you, as per your Birth Chart, they are known to bring you great benefits. On the other hand, if Garnet/ Hessonite does not go well with your Personal Stars, it’s best to avoid any of these gemstones. You may Speak to An Astrologer to find if Garnet is indeed your lucky stone!

If Garnet is suitable to you, it will –

Fancy Fact – It is believed that garnets were used by Asiatic tribes as a substitute to bullets.

Magnetised by the loveliness of the gemstone Garnet? Ensure that you wear it only if it will be suitable for you, as per your Personal Stars. If you are suffering from a health disorder, gemstones have the power to bail you out. Get a personalised report like Remedial Solutions in Personal Life Report to find out the best gemstone for you.

If you are already sure that this gemstone is the right one for you, you can get an original Garnet gemstone here.