Rahul Mahajan has always been the talk of the town, and mainly for all the wrong reasons. Whether it was his involvement in the drug abuse case or he being an abusive husband to his ex-wife Shweta Singh, a controversial Bigg Boss inmate or an eligible bachelor luring 17 would-be brides on the reality show ‘Rahul Dulhaniya Le Jayega’, in which he got hitched to Dimpy Ganguly on 7th March 2010. But it seems there is already some trouble in paradise. His second wife Dimpy Ganguly has accused him of domestic violence, which was also the reason for his first marriage breaking down.

The son of the slain BJP leader Pramod Mahajan, Rahul’s personal life seems to have been through many ups and downs. With his marriage on the rocks, Ganesha, with the help of Vedic Astrology, takes a look at Rahul’s Kundali and predicts his future and compatibility with wife Dimpy Ganguly-Mahajan. 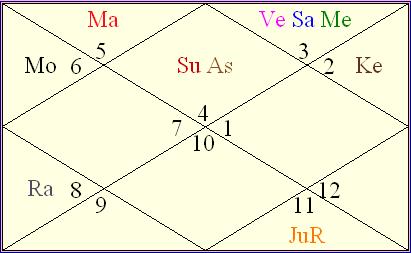 Good luck and may Lord Ganesha bless Rahul and Dimpy.