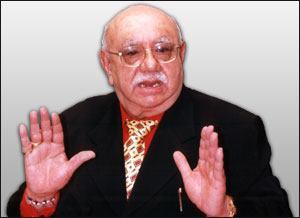 Astrology, the mystical subject that intrigues, enchants and captivates many across the world has acquired a new meaning thanks to one person. He is, none other than, India’s most famous and loved astrologer ? Shri Bejan Daruwalla. Gifted with supreme foretelling strength, Bejan ji is a devout follower of Lord Ganesha. A humble, friendly man, he considers himself as only a vehicle of His Lord and Master, Ganesha.

Bejan Ji respects all religions, and bows with folded hands and equal dedication before Hanuman, Allah, Zoraster and Christ. He is even willing to accept, like a true professional, that he may too sometimes go wrong. This, despite the fact that his foretelling ability has, not once but more, stunned and surprised even cynics and the harshest sceptics!

This revered astrologer was actually the first one to clearly, realistically and matter-of-factly predict the terrible revolution and end of tyranny and brute force in the Middle East. What happened is Egypt, sometime back, was for everyone to see! We now bring you some excerpts from Bejan Ji’s 2010 Annual Horoscope, and it may leave you simply stumped!

World Horoscope (October 2009 – Oct 5 2012)
Ganesha agrees, that the mantra, Observe! Observe! Observe! is mighty true of both, writers and astrologers. In this piece on World Horoscope, which I am writing on June 3, 2009 I have observed that Saturn will be in Libra, Western Astrology October 13, 2009 to October 5, 2010 –We may expect the following results for the world –

A New world order
Ganesha claims, there will be a new and certainly more just and fair and equitable world order replacing our present state of affairs. Why? Saturn in Libra will be in square or bad and ugly formation with Pluto in Capricorn. The main result of this will be the end of tyranny and brute force all over the world. Pluto opposed Saturn October 1942 to June 1945. Hitler the tyrant and dictator fell. Therefore based upon what happened in the past I have tried to have a
peep in the future.

Now, Bejan foresees some trouble brewing for the world owing to the upcoming Super-Moon! As per Bejan Ji, on March 19th 2011, the moon will be the closest to Earth, in last 20 years. The distance shall be 221556 miles, and last time it happened in the year 1993.

As per Bejan ji, the moon will oppose the mighty planets of Mars (violence and death) and Uranus (sudden upheavals and revolution). Also, on March 11th201 1 Uranus and Mars, both were in the watery sign of Pisces. Therefore, the Tsunami in Japan. Thus, till March 23rd, there is a danger to Japan and the whole world. Bejan Ji sincerely hopes and prays that he goes totally wrong this time with his predictions, and wishes the whole world the best of life, living and loving.

All the Best! May Lord Ganesha bless the world and everyone.